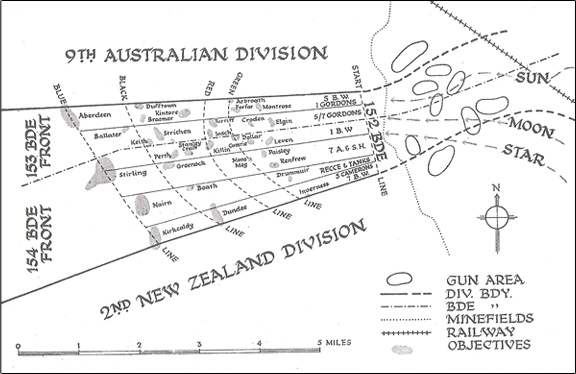 Diagram of the area of operations of 152 Brigade at El Alamein, North Africa, October 1942.

The Plan Montgomery was determined to attack the enemy using his infantry to create a gap and then push the armour through the gap created. The area for this was not the weaker sector in the south but the stronger part of the enemy position in the North. 30 Corps were to execute this attaching on a frontage four divisions wide.

The Division was moved forward in preparation for the attack into defensive "boxes" 25 miles east of El Alamein. 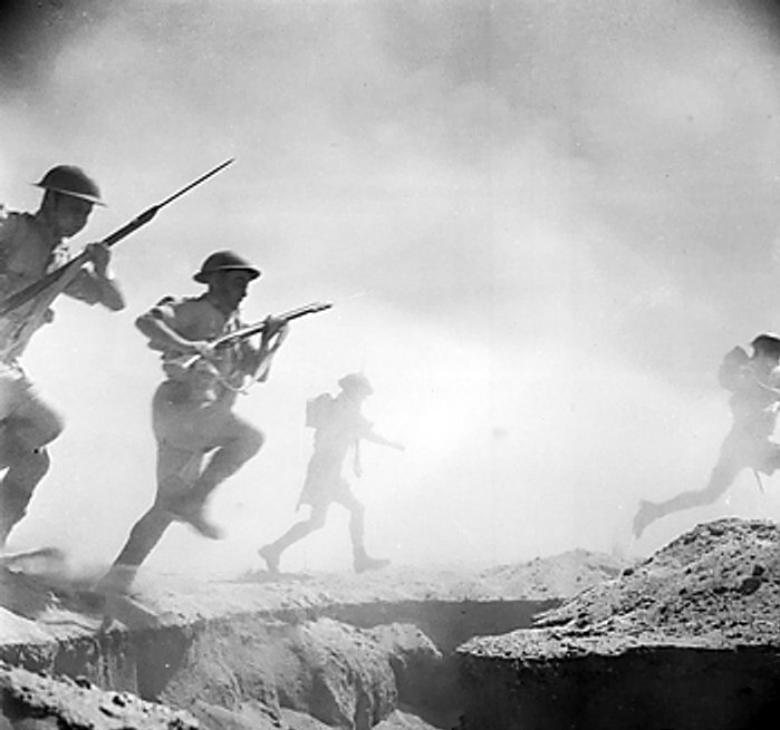 The attack commenced on the night of 23/24 October. From the Start Line facing west there were a number of report lines, Green, Red, Black and Blue. These would help to control the artillery fire and monitor the progress. Within various objectives were names with Scottish place names like Perth, Inverness, Keith and Aberdeen.

These four lines were to be taken in three attacks with reorganisation taking place between each attack. A brief summary of the actions of each battalion the from the left is as follows:

An extract taken from The Queen's Own Highlander magazine issue commemorating the 50th Anniversary of El Alamein, describing the 5th Camerons' initial advance and the use of the Company Piper, Donald MacPherson, to alert the advancing Black Watch of their friendly status.

An Account of El Alamein from 'A Brief History of 51st (H) Reconnaissance Regiment (1941 -1943) and its Involvement in the Desert Campaign'.

Notes on the Battle of El Alamein from 7th Argylls. [ Account ]

During the initial stage of the action the 2nd Seaforth had been the Corps Reserve. However on 24th they were given back to the division and were pushed forward through 1st Black Watch to form a bridgehead to launch 2nd Armoured Brigade. This they did resolutely and with serious losses for 36 hours.

The following account of the Battle of El Alamein comes from the personal account of Colonel John Sym DSO who was 21C of 2nd Bn. Seaforth Highlanders. Extracts cover 23/24 Oct and 1/2/3 Nov during Operation Supercharge.

Captain John Lang served with 128th (H) Field Battery RA (TA). He was at El Alamein and this is his personal account of the action between September and November of 1942 in North Africa.

On the 30th October, 152 Brigade, with 151 Brigade from 50th Division, were attached to the New Zealand Division to make a punch into the German line, which would then be exploited by armour. The operation was called "Supercharge". The plan was for the two brigades to advance on a 4000 yard frontage, 4000 yards into the enemy south of the Australian Division. In the early hours of 2nd November the attack was launched. The attack went according to plan and all objectives were taken by 0600 hrs. The enemy counter attack later on 2nd November was repulsed. 152 Brigade attacked again and by the 3rd November the enemy were withdrawing.

Operation Supercharge was the name given for the start of the break out operation that was launched on 2nd November.

The battle concluded on the 3rd November with the 7th Argylls of 154 Brigade taking the strong point of Tel El Aqqaqir to find that it had been abandoned by the enemy.