Lieutenant Colonel C A Cameron MC was commissioned in the Cameron Highlanders in 1939, he commanded a Company of the 5th Camerons at the Battle of El Alamein at the age of 22. He commanded the 4th/5th Camerons from 1957 to 1960.

These extracts are taken from The Queen's Own Highlander magazine issue commemorating the 50th Anniversary of El Alamein. 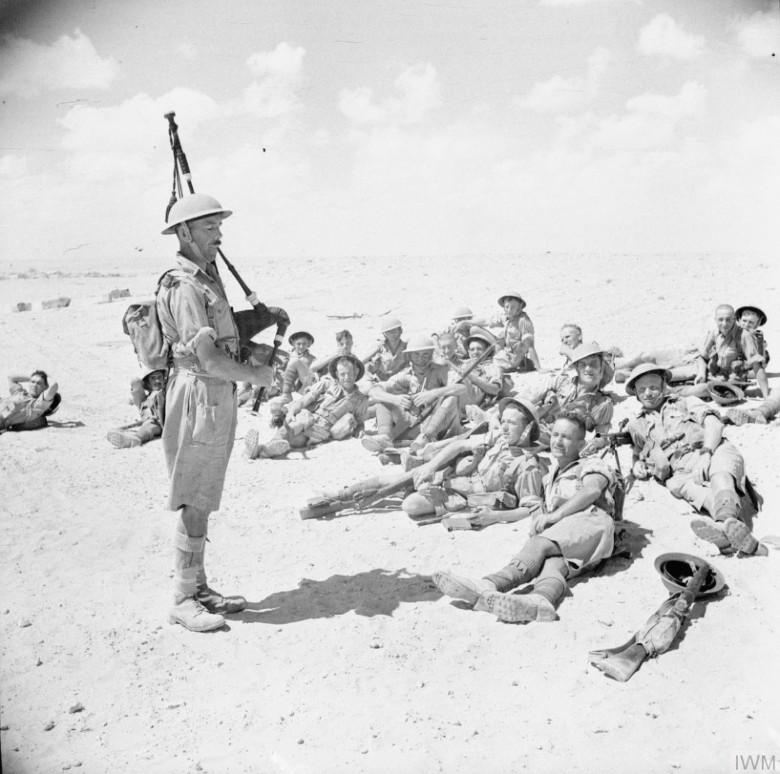 Caption reads "Piper MacDonald of the Seaforth Highlanders plays to some of the troops who make up the Highland Division while they rest during a march in the Western Desert, 23 September 1942."
Taken by Sgt.Martin 23.9.42.
With kind permission of the IWM.

"We left the UK at the end of June 1942 and arrived in Egypt on 12 August. There we trained and carried out rehearsals, and then we went up into the front line at Alamein. On the evening of 23 October everyone had been fully briefed. They knew the objective; they knew exactly how far they had to go, and they knew how to keep in line. We were led by the Intelligence Officer with a compass, and we just had to keep in line and keep going until we got to what we thought was the objective in the desert.

Our objective was codenamed 'Inverness', and of course the Divi¬sional Commander, General Wimberley, who was an Inverness man, was absolutely delighted that the first report which came back to him was that Inverness had been captured.

It seemed to take a long time to get there, but I suppose it was really only half or three Quarters of an hour. There was a tremendous barrage beforehand and a certain amount of machine gun fire. It was not easy to identify the objective which was just an area of sand, and there were not actually any enemy on it as they had withdrawn. There were no landmarks, but it was artificially lit up and so there was a certain amount of light. You just had to go by the compass and count the number of paces. When we had got there we had to dig in and hold the objective until the next battalion, the 7th Black Watch, went through us to the next objective beyond."

"Every company in the attack had a piper. Our's was Donald MacPherson who came from Skye. He played the Inverness Gathering and the Pibroch of Donuil Dubh.

Having captured our objective 'Inverness', we dug in, and we heard the Black Watch corning up behind with bloodthirsty cries and clearly bent on destroying everything in front of them. Knowing that clear order do not always get down to each private soldier, I feared that they would mistake us for the enemy and fighting would ensue between us. I therefore told our company piper, Donald Macpherson, to get hold of his pipes again and play the Pibroch of Donuil Dubh so that the Black Watch could not possibly mistake who was in front of them. Unfortunately, after the Black Watch had passed through safely, Piper Macpherson was killed by a direct hit on his slit trend which he was sharing with the CSM of the same name. This is possibly the last time the pipes were played in the middle of a battle, certainly in the Camerons. It carried on the tradition set by Piper Mackay at Waterloo."

Extracts taken from The Queen's Own Highlander magazine issue commemorating the 50th Anniversary of El Alamein. The extract describes the use of the Camerons' Company Piper to alert the charging Black Watch of their position.