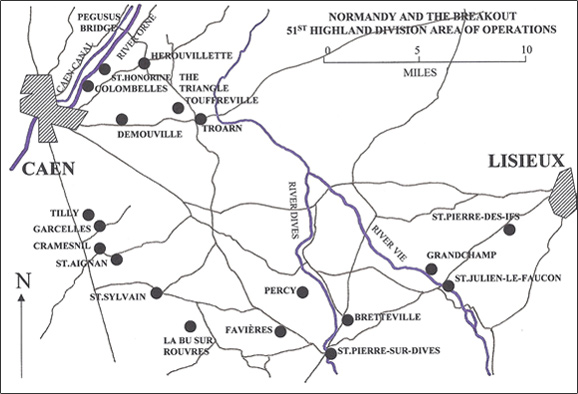 Normandy and the Breakout

After the landings the operations in the following weeks were some of the worst the Division had experienced. The Division landed west of the Ornemouth but, after initial operations by 5th Black Watch against the area of Douvres, 153 Brigade followed by 152 Brigade crossed the Orne to operated to the east of the Orne and north east of Caen centred on an area known as the Triangle. This was bounded Ranville - Touffreville -Breville, with a wood also called the triangle on the east side.

On 13th June, 152 Brigade ran into stiff opposition in the area of St.Honorine and Demouville. Their attacks were driven off and they went into a defensive position north of St. Hororine. Without securing St.Honorine it was not possible to take Demouville further south and to the east of Caen. On the 22nd June the Camerons were launched again at St. Hororine, took it and despite counter attacks, held it. Meanwhile during this period fierce action continued around Escoville.

154 Brigade in reserve were, for a considerable period, in defence at Bois de Bavent and subject to heavy enemy artillery fire. The brigade then joined the Division in the defensive position and all three brigades were tied down in the bridgehead in and around the triangle, facing the Germans on two sides and subject to near continuous bombardment in the close country.

On 11th July 153 Brigade launched a night attack on Colombelles, a village with a large factory and chimneys which provide excellent enemy observation. Despite a determined attempt the position was not taken, a German armoured counter attack destroyed 10 of the 11 Shermans supporting 5th Black Watch, and at 0830 the next morning the Brigade withdrew back to St. Hororine and Longuecal. This failure, coupled with previous setbacks, had a marked effect on the Division's self esteem.

This Operation Order was kindly provided by Mrs TBM Lamb and was signed by her late husband, then Adjutant of 5th Camerons.

On the 18th July, in Operation Goodwood, 5th Seaforth successfully launched south and once successful the 2nd Seaforth and 5th Camerons pressed on south east toward Troarn. The 5th Camerons Op.Order No1 gives details of an "on call" counter attack plan should 5th Seaforth and 2nd Seaforth be overrun. In fact they were successful and went firm consolidating their gains and for 10 days held their objectives under almost continuous fire until 152 Brigade was relieved by 153 Brigade.

Although Operation Goodwood had gone well for the Division, restoring in part the its confidence and reputation, the previous failures had left their mark. The Divisional Commander, Major General Bullen-Smith, was replaced. The new commander was Major General T G Rennie, previously a commander of 154 Brigade.

Whereas the Division had been very at home with 30 Corps in North Africa and Sicily, they did not enjoy their time with the 1st Corps in Normandy and felt that the Corps was in part responsible for the problems they had encountered. They were therefore not disappointed to be reassigned to the Canadian Corps for what was to follow.

Operation Totalise (The Breakout) would commence at the end of July.