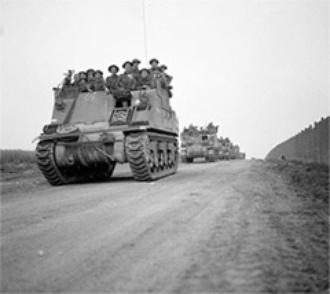 Operation Totalise, Troops on the Move

Troops on the move during Operation Totalise, August 1944

By early July Cherbourg had fallen to the Americans and the British occupied Caen. The US forces pressed on to St. Lo and commenced the isolation of the Brittany peninsula. The US success now set the conditions for Montgomery's break out. This took the form of three operations, Bluecoat which began on 30th July, Totalise on the 7th August and Tractable which began on 14th August.

For Operation Totalise the 51st Highland Division was placed under command of the Canadian Corps and on 6th August moved forward to begin the operation. With the Division were grouped the 33rd Armoured Brigade which became the Division's affiliated tank brigade.

The Canadian Corps Plan - The plan was for an advance on a two brigade front, 154 Brigade left (supported by the 33rd Armoured Brigade) and a Canadian Brigade right, on the axis of the Caen - Falaise road. One of the Canadian Corps Commanders innovations was to create armoured personal carries by taking now obsolete "Priest" self propelled guns, removing the guns and using them as troop carriers called "Kangaroos", each carried 10 fully equipped soldiers. 154 Brigade was mounted on these.

The Action - The attack began on the night of the 7th August with an large bomber attack. At 0230 hrs 154 Brigade advanced in two columns with over 350 armoured tracked vehicles. Major A McKinnon MC provides a graphic account of the actions of 7th Argylls on Op Totalise. (link). With the objectives successfully taken 152 Brigade cleared the enemy that had been bypassed and met stiff resistance in Tilly before overcoming it. 152 Brigade, which had secured the start line now moved up and took Secqueville-la-Campagne and on to Soldiers.

When the first phase of the breakout ended on the 10th August the 51st Highland Division had secured all its objectives.