Early in the training, once hostilities had ceased, General Wimberley took battlefield tour back to Gerbini and Sferro to consider some of the lessons. At the end he told those present that he would hand over command and was going back to the appointment of Commandant at the Staff College. His successor would be Major general Bullen-Smith.

Major General Wimberley, affectionately know as "Tartan Tam" for his determination that the Division would wear the kilt, had commanded the Division from its England through North Africa and Sicily. On his departure he published the following farewell messages to his Jocks:

"Order of the Day to all Ranks of the 51st Highland Division" :-

"On giving up command of the 51st Highland Division, in which I have served for the past three years, the Division, moreover, in which I was so proud also to have been numbered in the last Great War, I find it difficult to express to you what I feel.

"It is naturally easiest on this occasion merely to recall to memory some of the milestones passed in the long road which we have travelled together, ever onwards, from Scotland right across Africa and into Europe.

"For instance, the many tributes which your spirit, discipline and behaviour brought from those leaders best qualified to compare us with other Divisions in those now far-off days at home.

"ALAMEIN, and that moonlight night, when you went into your first battle, new and untried as individuals, but bearing in your historic tartans and your Pipes an inheritance of centuries of gallantry from your forebears, and each bearing Scotland's banner in your hearts.

"MERSA BREGA and its mines, and our gallant Engineers who died as we went on.

"BUERAT, and the rapid advance to RIPOLI, when your spirit to get forward, from the leading Highlander to the very back of the Division?s Administrative Services, resembled a living flame.

"MARETH, when you showed that the Highland Division could defend as well as attack.

"The race for SFAX. That hard fight at AKARIT, when you pressed through mines and wire and defences as on a field-day, but paid the inevitable price for your gallantry.

"The SICILIAN beaches; and now FRANCOFONTE, GERBINI, SFERRO and its hills, almost still reverberating with the crash of our artillery as our Gunners hammered the German infantry and tanks, and as our ?Die-hard? machine-gunners fired their belts on the bullet-swept tops of SAN ANTONIO.

"By your deeds, it is not too much to claim that you have added to the pages of military history, pages which may well bear comparison with the stories of our youth, telling us of our kinsmen who fought at Bannockburn, Culloden, Waterloo, the Alma, and at Loos. Further, in achieving this you have earned, as is indeed your due, the grateful acknowledgments of your Country.

"All this, however, belongs to the past. All this can be summed up by one verse recently written of the Division in the Scots Press:-

"It is the future which matters most. It is concerning the future about which I would therefore remind you to-day, and especially those thousands of you who have joined the Highland Division since we left Egypt.

"No individual, no Regiment, no Division can afford to rest on its laurels. Just as your fathers in the Highland Division won their proud position as the premier fighting formation in 1917 and kept it through many weary months, so must you, in this generation, maintain your reputation to the end of the road. To do this, you must ever set your own standards, you must 'gang your ain gait '; you must choose the hard and not the easy path. Your discipline and behaviour, your saluting, your battle drill, your battle technique must continually be overhauled and be kept at the highest level, come what may.

"Provided all this is maintained, then, with your national background and your great morale, you will, in due course and God willing, fight your last battle as bravely and successfully as you fought your first - proud that all must still grant to you your Alamein motto of ' Second to None.'

"For myself, I can best thank you in the farewell words of my great predecessor Sir Colin Campbell, who led our same famous Highland Regiments to such glory nearly one hundred years ago-

"From the bottom of my heart." 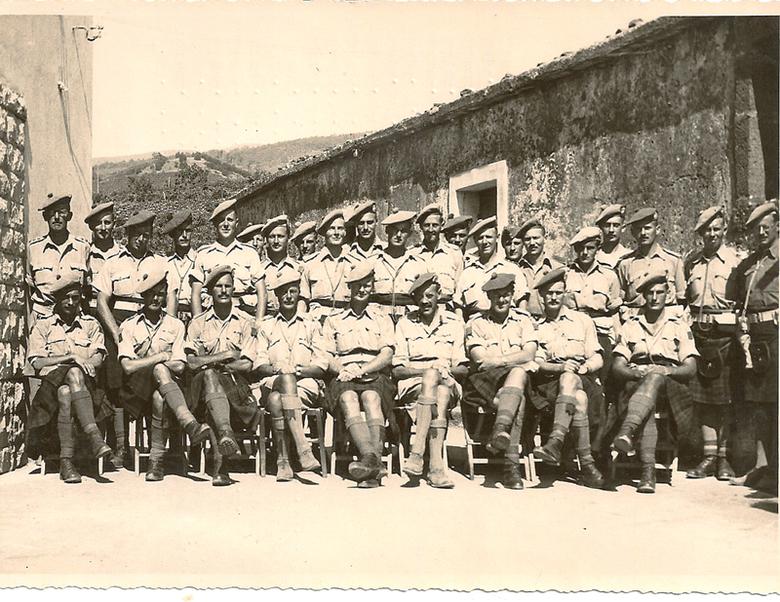 General Wimberley is the forth from right in the front row of the above picture of the Officers of the 5th Camerons, taken on the 19th August 1943 at Fleri, Sicily.

The full list of those present in the above photograph is as follows :