This story is reproduced with kind permission of the ROSS-SHIRE JOURNAL, which printed the story of Johnnie Matheson NOVEMBER 14, 2003 under the title of "LOCHCARRON MAN TELLS THE FANTASTIC TALE OF HIS WAR" by Kate Macpherson

WAR HERO TELLS HIS TALE
Five escapes... then a drive to freedom in a brand new BMW

Such a tale of death-defeating defiance, deprivation, desperation, dastardly deeds against his person - and downright good fortune - as never heard before!

He walked into wartime captivity with a haversack full of looted French franc notes of doubtful value from a bombed bank in St Valery - and more than five years later drove across a war-torn Europe heading for his Highland home in a brand new BMW car festooned with American stars and stripes, a legitimate fortune in pounds sterling in his pocket.

In between times, Seaforth Highlander Johnnie Matheson of the fourth battalion, a native Gaelic speaker and former shinty player, escaped from his German captors no less than five times! 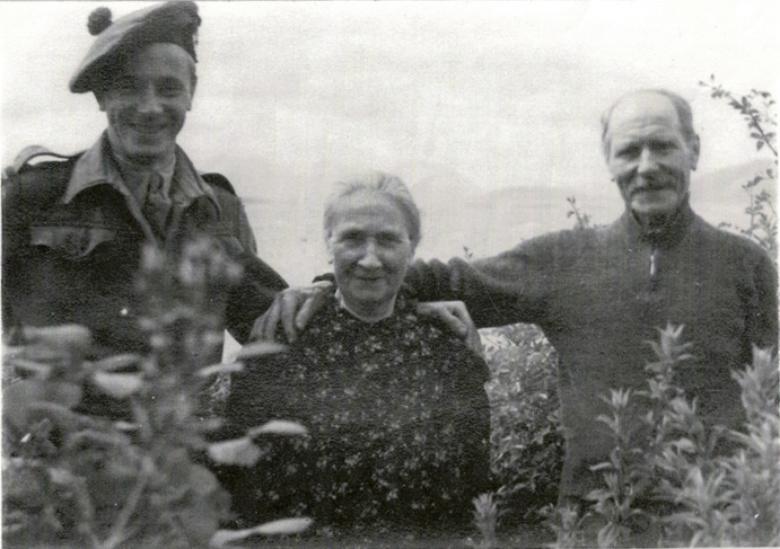 Lochcarron man Johnnie, now aged 86, was thought to be the oldest WWII soldier and former POW on parade at Sunday's Remembrance Day service in Dingwall.

Afterwards he revealed how, like thousands of others of the 51st Highland Division, he was captured in Northern France after the St Valery debacle and force-marched across France to be barged into Germany along the Zuider Zee. The franc notes were used to buy cups of water for himself and his mates along the way at ten francs a time.

The 23-year-old former 'Merchant Navy man - with five years service with the Ben Line in the Far East in the 1930s - ended up in central Germany and a succession of different prison camps. Heavy labour to start with included dam building and a year salt mining (from 2.45am till 7pm) where he was badly injured in a roof fall which killed two buddies.

Light duties followed - carrying 2cwt sacks of seeds up stairs under close German guard. He was there a year and managed to teach himself German. This was later to prove a mixed blessing with important people not truly believing he was British. 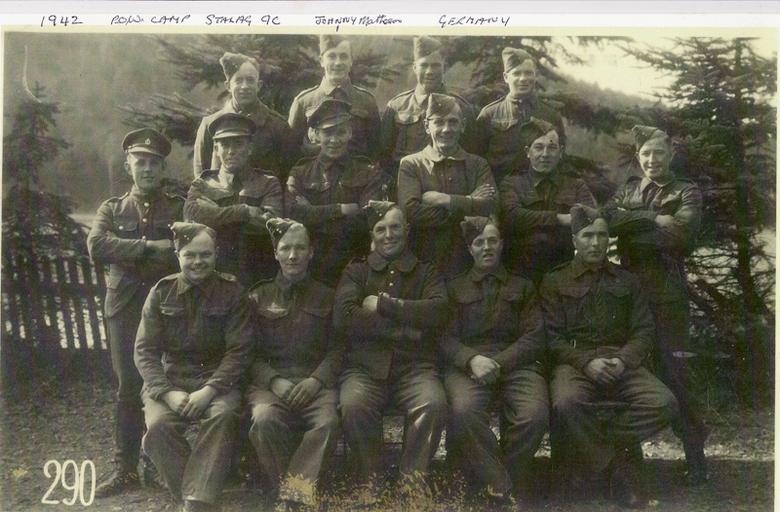 As he was to do twice more from camps - where he was used for river straightening work and in a salt factory - he saw an opportunity and simply walked out of the camp gates. Lack of the local patois and contacts on the outside saw his recapture each time, and each time he was put in solitary confinement for a month.

Escape number four was more dramatic from a camp at Erfort where, ironically, the work was easy - harvesting seeds from plants. Johnnie recalled, "My friend Snowy and I made a tunnel from under the stove in our wooden hut five feet down, maybe two hundred yards long and under the eight foot high barbed wire perimeter fence. It took six months to make. When the big day came, we crawled out and were nearly shot. We were being machine-gunned and we just ran and ran. We nearly burst our hearts but we got away and we were a month on the run.

Snowy had some maps with no towns or villages marked so we were going by the stars and heading, we hoped, for neutral Switzerland. We ate vegetables stolen from gardens at night and hid during daylight. After a month we reached the shore of Lake Constance between Germany and Switzerland. We could not see the other side.

Snowy was a strong swimmer but I could not swim. He offered to take me on his back and pleaded with me to go with him. I said, "If I get shot - it doesn't matter, if I get drowned it does!" I walked away with tears in my eyes. He was starkers, when he plunged into the water and I never saw him again, but I did hear from him. He reached Switzerland and the care of an Englishwoman married there. Much later a letter addressed Johnnie Matheson, POW, Germany reached me with his news. But I never heard of or from him again. I didn't even know his real name."

Inevitably perhaps, Johnnie was recaptured again and screened by the Gestapo. He thought he

was going to be shot but instead his fingernails were painfully removed and he was put underground, 200 steps into the bowels of the earth with no light whatsoever for another month's solitary confinement. On release from this hell, a doctor met him halfway up the steps and bandaged Johnnie's eyes in case he went blind.

Next billet was in hotel premises while working in a nearby factory carrying heavy loads. Fluent by now in German, the hotel owner Maria Stainke took a shine to him and secretly passed him parcels of extra food. She even made him a special pair of trousers for his next planned escape and threw them over the wire of the next camp he was in.

By the time the Second Front had started in Europe with D Day in June 1944. Word got round that the prisoners were to be marched to the Alps and machine-gunned. After three days into the march Johnnie and his friend Jimmy Donald of Aberdeen, later a police inspector, now deceased, were billeted in a hayloft on a farm. They asked the farmers could they stay. It was agreed but with German troops and Gestapo sniffing around the farmers got worried, and Jimmy took cold feet. "And I don't blame him," said Johnnie. "I slid into a ditch. It was pouring buckets and I was on the run again!"

After many days walking and seeing gun-flashes, but not knowing whose, he got into a wood and lived in a hollow covered by branches for a long time while war raged around him.

"The wood was being shelled and I had an idea it was the Americans. I could hear the Germans speaking right under my nose for days on end. There were a lot of dead Germans lying around. Eventually the Americans came into the wood and I was nearly shot. "I am a POW!"

"I was on my knees, by now only six stones in weight, starving and dying of thirst I asked for water and was given a bottle of rum which I glugged down - and nearly died. I had my stomach pumped and was given good food.

"After two days I was issued with an American uniform and GI helmet, an automatic rifle and posted to a tank. The war was still on and I served two months with them. They took me with them, fighting to the Czech border and on to Prague."

When peace was declared in Europe in May 1945 Johnnie stayed with General Paton's army, acting as a German interpreter for six weeks. 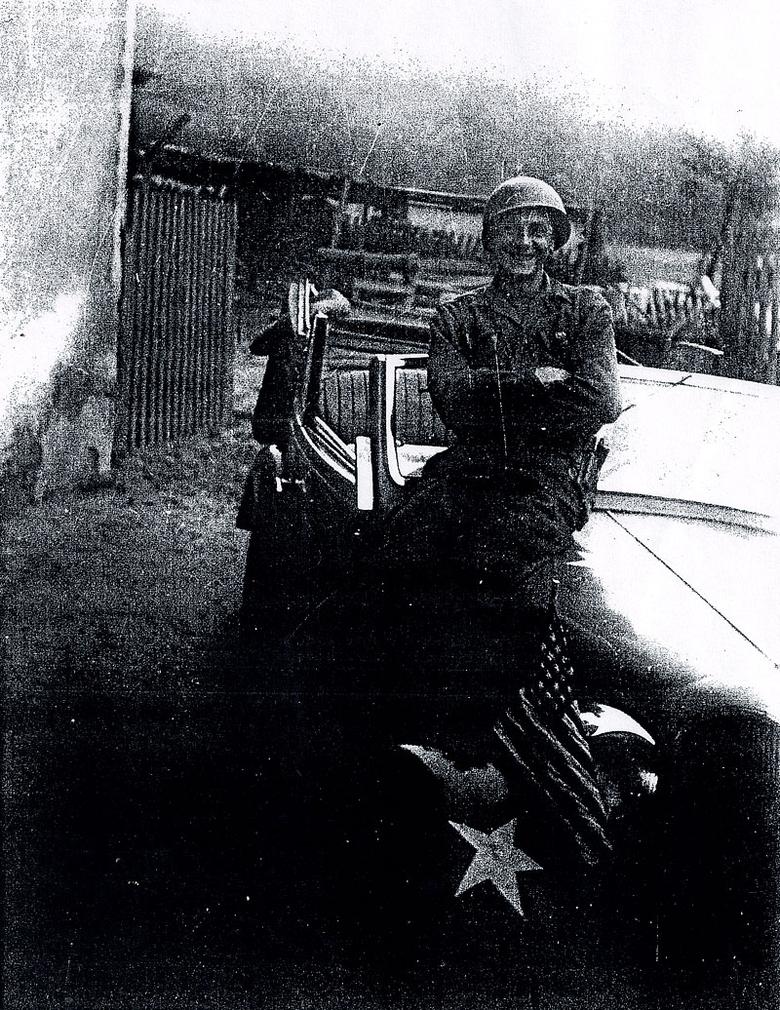 May 1945. J.Matheson in US uniform with new (German) BMW. An American star is painted on the body work and an American Flag is attached to help identify the vehicle as 'friendly' to Allied forces.

"Then the Yanks didn't know what to do with me! They gave me a brand new BMW which had been requisitioned and £1,000 in British cash after a whip-round. They gave me a revolver and ammunition and a pass and a letter which said "this man is believed to be a British POW." They were awfully good to me."

With stars painted on every surface of the car and two American flags flying, Johnnie set off homewards with 50 gallons of fuel aboard.

Many more adventures were to lie ahead until he was eventually reunited with one of his brothers in an Edinburgh street. "Is that you Johnnie?" and they hugged one another after all those years.

After leaving the Americans Johnnie had headed back to the last German factory he had worked in.

"The boss there had been a particularly nasty Nazi. I asked for the boss but when alerted by his staff he fled. I had the loaded revolver in my hand and if had come I would have shot him!"

J.Matheson, letter from US Capt.

This is a photo of the letter, dated 19th May 1945, given to Johnnie Matheson by US Army Capt. Judson B. De Loach to help explain how he came to be in possession of US Army Shirt, Helmet and Boots, in addition to a confiscated German BMW "bearing the American Flag"...

Johnnie, who became a farmer after the war, retired in 1969. He was at Sunday's parade with his close companion Barbara Welding (65) of Achnashellach Lodge, a former farmer too and widowed like Johnnie.

Sprightly for his age, six-footer Johnnie and Barbara were later heading for a dance in Inverness.

With a twinkle in his eye, he said, "Coming?" but by then the computer keyboard was calling'!