A statue of a Black Watch soldier has been unveiled in Belgium to mark the centenary of World War One. The bronze statue, designed by Edinburgh sculptor Alan Herriot, was installed in front of 300 regimental veterans at Black Watch Corner

The statue, which was made in Scotland and shipped to Belgium last month, depicts a Black Watch sergeant in a World War One. 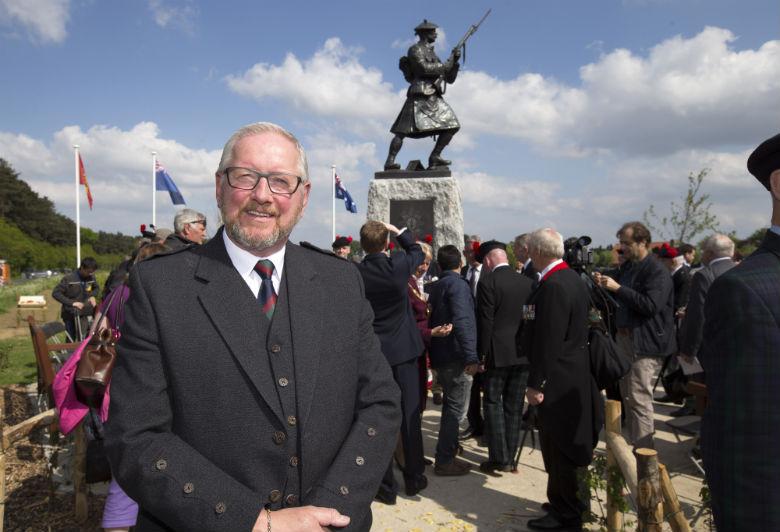 A statue of a Black Watch soldier has been unveiled in Belgium to mark the centenary of World War One. The bronze statue, designed by Edinburgh sculptor Alan Herriot, was installed in front of 300 regimental veterans at Black Watch Corner.

On 13 August 1914, 31 officers and 1,031 soldiers of the 1st Battalion The Black Watch (Royal Highlanders) embarked for France as part of the British Expeditionary Force (BEF) and took part in a series of battles and fighting withdrawals, while the German Army pressed forward relentlessly.

During October and early November, having suffered a large number of casualties, the 1st Battalion The Black Watch, as part of 1st (Guards) Brigade took part in three separate battles which made up the First Battle of Ypres:

By 11 November, despite receiving some reinforcements, the strength of the battalion had been reduced to 9 officers and 228 soldiers who, as part of the BEF holding the Ypres area, numbered only about 7,850, including reserves. They were to face twenty-five battalions of the Kaiser’s elite Prussian Guard, numbering 17,500 men. The main assault came just north of the Menin Road and fell upon The Black Watch, Scots Guards and Queen’s Own Cameron Highlanders.

The contemporary Black Watch history and other records describe the battle: ‘Between 6.30 am and 9 am on 11 November, the heaviest bombardment so far experienced by the British forces broke out; as it lifted, a Division of the Prussian Guard, ordered by the Kaiser to break the British line at all costs, attacked the front. Under cover of the bombardment, a strong enemy force drove back D Company and the two platoons of A Company entrenched at the south west corner of Polygon Wood. C Company under the command of Lieutenant Anderson and in a strong point (point d’appui) 380 yards from the south and west corner of Polygon Wood held out firmly. This split the attack into small parties of 20–30 Prussians, many of whom were soon lost in the woods behind. As they emerged from the back of the woods the guns of 41 Brigade Royal Field Artillery, sited one thousands yards west of Nonne Bosschen Wood, opened direct fire on the enemy at a range of 300–400 yards.

The effect was devastating and the German attack faltered. At 3 pm a counter attack by the 2nd Battalion The Oxfordshire and Buckinghamshire Light Infantry, supported by the Royal Field Artillery, destroyed the remnants of the Prussian Guard and the line between the Menin Road and Polygon Wood was re-established. At 3.30 pm three Companies of the 1st Battalion The Northamptonshire Regiment, supported by parties of The Black Watch and Queen’s Own Cameron Highlanders, advanced from Nonne Bosschen Wood to retake the south west corner of Polygon Wood. This corner was known on all later maps as Black Watch Corner.  Originally, however, it was the C Company “strong point” south west of Polygon Wood which was given that name.’

The First Battle of Ypres was arguably the most critical defensive battle fought by the British in the Great War and, with the added support of French artillery batteries, the German attempt to break through to the Channel Ports was halted.