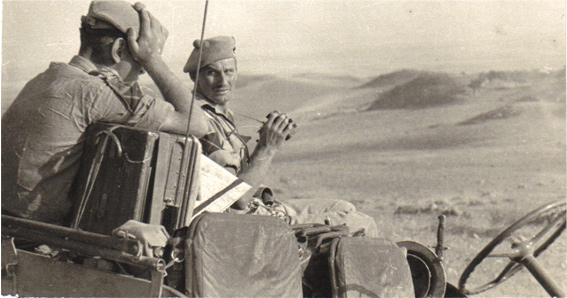 AN OUTLINE OF THE BATTLE

No further attack was made on Gerbini and 154 Brigade were withdrawn behind the Dittaino River, 153 Brigade to the west held the Sferro bridgehead and 152 Brigade were in reserve. The role of 51 Highland Division in the continuing advance was to cross the Dittaino and Simeto Rivers and advance on Paterno.

The Division was tasked to take the road from Sferro to Catenanuova but to achieve this it was necessary to clear the enemy of the Sferro hills. The enemy position was on a line of hills running north west to south east. At the north west end was point 224. Along to the right in a fold in the ground was Iazzovechio farm and further right Angelico farm with an olive grove behind it. Further right a valley came down through the hills passed the railway to the dry bed of the Dittaino.

The plan was for a deliberate Divisional attack. The details are in the 51st Highland Division Operation Order No.76. The start line and observation post where the GOC made his plan was Mount Turcisi to the south. On the right would be 152 Brigade. 5th Camerons would lead with 5th Seaforth behind and 2nd Seaforth in reserve. Simultaneously 154 Brigade on the left. 7th Black Watch on the right 1st Black Watch on the left and 7th Argylls in reserve.

An extract of detail from the record of 61st (Highland) Anti-Tank Regiment Royal Artillery in the Sicily Campaign, July 1943

The attack was launched on 31st July. The 5th Camerons encountered heavy opposition on the ridge and were reinforced by 2nd Seaforth. After a heavy strike by 128th Field Regiment, point 224 was taken. It was held, despite a strong German counter attack and the fighting continued throughout the day. After a hold up in the gully the 5th Seaforth, following behind 5th Camerons, got to Angelico Farm. The Olive grove was full of enemy and the grove continued over the slope. The Camerons got to the base of the wood and dug in. They too repelled the tank and infantry counter attack thanks to the artillery support, which broke it up. 13 Platoon of 1/7th Middlesex also provided important supporting fire.

Meanwhile the two battalions of Black Watch, supported by the Argylls, were also advancing. Between the 5th Camerons, and the right forward battalion of 154 Brigade, 7th Black Watch, was a deep gully. 7th Black Watch?s axis ran parallel to this gully and over the ridge. Opposition on the crest was stiff ? "B" Company reached the ridgeline but "D" Company were pushed back off. However, "A" and "C" Company carried on over and down the other side. Both "D" and "B" Company were ambushed and roughly handled. The 1st Black Watch were not so stiffly opposed and managed to take their objectives with only light casualties.

On the following morning the Germans mounted various counterattacks but without success.

On 1st August the 7th Argylls were given orders to advance on Pietraperciatta which was to the left of 1st Black Watch position. This was taken with little resistance.

This effectively brought the battle of Sferro to a successful conclusion. Among the accolades the Division received, General Oliver Leese, the Corps Commander, later said that the successful action of the Division at Sferro had much to do with the whole German withdrawn on that front.