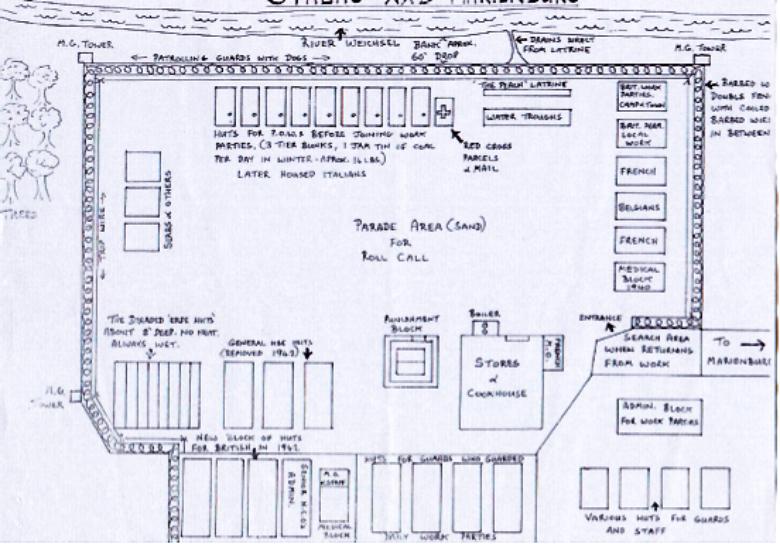 A hand drawn sketch map (presumed to be by Henry Owens) showing the layout of Stalag XXb, Marienburg (some time between 1942 - 1944).

This was a bleak, forbidding camp on the outskirts of Marienburg, with the usual double wire fencing, lookout towers, and floodlighting. It housed many prisoners of all nationalities, in different compounds, and had a look of despair about it. We were allocated to a long hit with three tiers of bunks and an earth floor. We soon realised it was overrun with rats.

The German in charge was Unteroffizier Poznasky, a very strict disciplinarian. He and his bike were legendary amongst ex-XXb POWs. Although we were only in the camp for about three months, my memories are of interminable “Appels” (roll-calls) that seemed to last forever, day and night. We made things worse for ourselves, moving about when they tried to count us, and of course, when the count did not tally, the Germans had to start all over again. On one or two occasions, they set up a machine gun in front of us, threatening to mow us down if we moved again. We also had raids by the military police, who turfed us out of the huts. We had to return one by one to see our belongings searched, they also carried out a body search. It was funny to see our men, whilst waiting to be searched, dropping German money or other things forbidden onto the earth of the parade ground, and digging it in with their heels. It was even funnier afterwards, watching them try to retrieve it.

Whilst at this camp, Darky and myself did a variety of manual jobs; loading barges and wooden huts, or working at the local hospital (not at all “tradesmen's” jobs). We were then, along with seven other tradesmen, posted to Camp 946 at Elbing, East Prussia.