The Divisional Plan now was for 154 Brigade to continue the attack moving through 7th Black Watch in Hives to take Lavaux and then exploit on to Beaulieu. Simultaneously 5th Black Watch from 153 Brigade but placed under command 154 Brigade was to move through La Roche and up to hill 400 overlooking Hubermont and Roupage. The 1st and 5/7th Gordons from 153 Brigade would move through to take Nisramont and Ortho.

The 7th Argylls advancing down the Hives - Beaulieu road encounter strong and well prepared opposition dug in Lavaux. It was not until 1900 hrs that Lavaux was taken by the Argylls. The advance continued on foot and Beaulieu was reached at 0100 hrs on the morning of the 13th January. The few Germans there were taken by surprise and surrendered. In the early hours of the morning two German tanks approached the village - one was destroyed and the other beat a hasty retreat. Before dawn the battalion had managed to get its anti tank guns up to help secure the position. From Hives to Beauieu the Battalion had suffered 38 casualties, nine of which were dead.

On the morning of the 13th the 1st Black Watch moved through the Argylls to occupy Erneuville which had been abandoned leaving a great deal of enemy equipment. 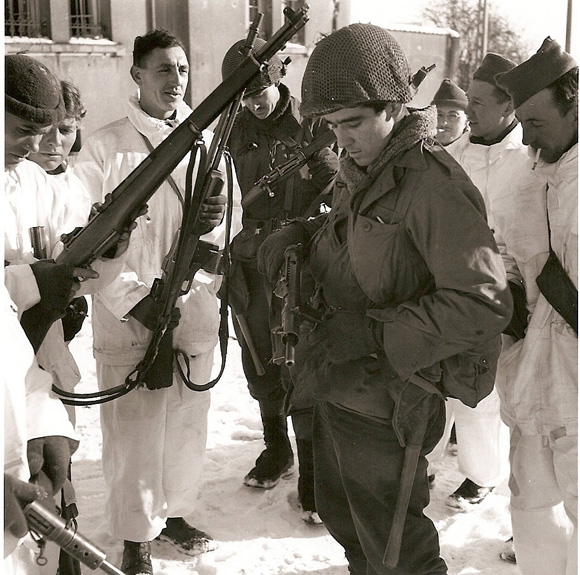 Men from the 5th Camerons wearing snow suits inspect the weapons of two GIs from the American 87th Division during the allied link up at Champlin. 14 January 1945

Meanwhile the 5th Black Watch moved through La Roche, under command of 154 Brigade, in the direction of Hubermont. The roads were blocked with large fallen trees which had to be cleared and the enemy positions were well defended with infantry and armour. Progress was slow. In the early hours of the 13th the enemy began to withdraw and the advance continued.

Thirmont, on the Battalion right, was reach by "D" Company before dawn and "B" Company was sent forward to clear Hubermont. The 1st Gordons now moved up to the rear of Hubermont in readiness for their attack on Nisramont. Both they and the 5th Black Watch were subject to heavy shelling and direct fire from the German tanks in the woods. Because of the strength of the enemy position it was decided that the attack by 1st Gordons would wait until dusk.

On the 12th the 5/7th Gordons had move down the congested road through La Roche and in the afternoon of the 13th they occupied Roupage, which would be the start line for the attack on Ortho. From here, before dawn on the 14th, they moved through 5th Black Watch in Hubermont and on to take Ortho. The enemy had withdrawn during the night and there was little resistance.

By the 14th the Division had achieved all that had been asked of it. It remained to mop up and stabilise the line. On that day the 5th Camerons made contact with the Americans in the area of Champion. By the 15th all combat in the 30 Corps sector of the Ardennes had finished.

An account by Private Tom Renouf - 'A' Company, 7th Platoon, 5th Black Watch - of the attack on Hubermont. His account picks up the operation on the 12th January 1945. (The Ardennes, Subsequent Operations)

Dr. Tom Renouf is the Secretary of the 51st Highland Division Veterans Association.

An Account By Major Pilcher, Officer Commanding C Company, 5th Black Watch of action during the later part of the action seen in the Ardennes. Major Pilcher MC, is now a Trustee of the 51st Highland Division and Ross Bequest Fund. His account picks up events starting on 12th January 1945.