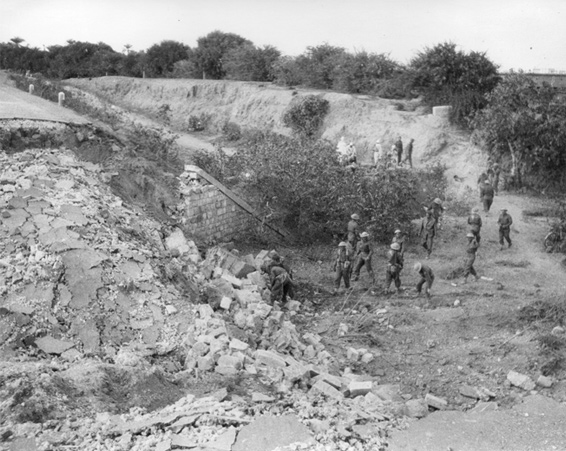 The initial pursuit was hampered by rain on the 6th and 7th of November, but Tubruk was taken on 13th November and Benghazi on the 20th. The 51st Highland Division were relieved after the battle by south African forces and enjoyed a period of reorganisation before joining the advance and moving forward towards Mersa Brega. Here as they prepared to attack what was described as a very strong position. However on 13th December, before the attack was launched, there were reports that the enemy had withdrawn. During the night the 1st and 7th Battalions Black Watch encircled the Mersa Brega from north and south. The 1st Battalion suffered heavily from mines in the dark. The 7th Argylls were moved forward into Mersa Brega to fill the gap between the two Black Watch battalions and found it heavily bobby trapped but abandoned. The 7th Armoured Division now took up pursuit and the 51st Highland Division became Corps Reserve.

New Years day was celebrated by the Division at Wadi Matratin between Marble Arch and Sirte.

On the 5th January the Division moved forward over 170 miles to take on the next enemy defence line was at Buerat and Wadi Zemzem. The initial dispositions had 154 Brigade at Wadi El Chibir and then relieving 7th Armoured Division at Wadi Ouesca. 153 Brigade was situated 8 miles behind Wadi Mira and 152 Brigade in Wadi El Chibir.

154 Brigade commenced "Silk" on the night of the 14th January and 24 hours later 153 Brigade began "Satin" assaulting the Buerat position. The attack was mounted by 1st Gordons with Scorpion mine clearers, 40th Royal Tank Regiment and 1/7th Middlesex regiment machine gunners. Despite some casualties the objective was secure and as the enemy withdrew the exploitation began. This involved 5th Gordons passing through 1st Gordons and swinging south west followed by 5th Black Watch swinging north west. By the 16th January Phase 3 "Cotton" commenced with 152 Brigade. Reports of an enemy position some 40 miles further on at Churgia, a third of the distance to Misurata, resulted in the Division being ordered to assault it that night. The advance pressed on and, despite casualties from the German rear guard artillery, on the 19th they were south east of Misurata.

154 Brigade were ordered to bypass Misurata and make for Hons and the road to Tripoli.