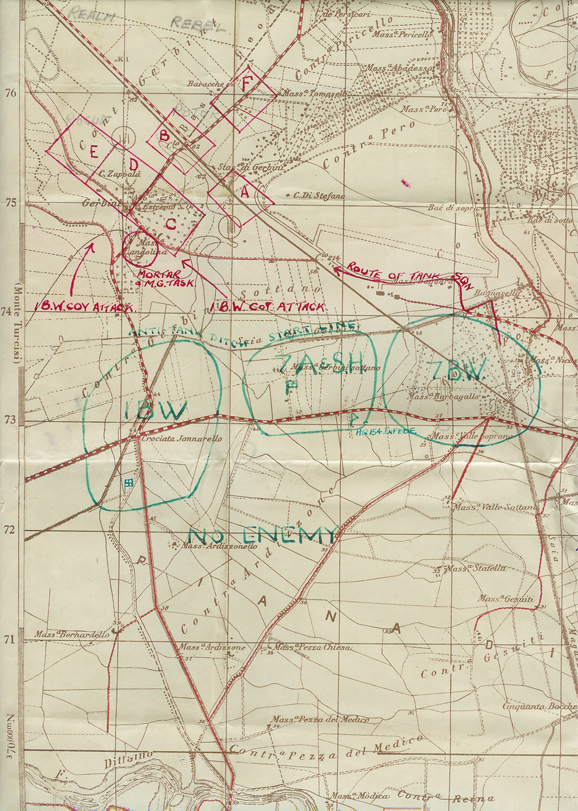 The battle at Gerbini took place over the period 18/20 July. 154 Brigade pushed forward to capture Gerbini. Gerbini consisted of a cross roads, railway station, airdrome and barracks on a low ridge beyond which was the Catania plain.

The 1st Black Watch were in the lead and were to take the cross roads south of Gerbini. They were then to move on to capture the barracks and station. On the right the 7th Black Watch were to move through the airfield to the Simeto river. They were to seize the bridge if still intact and the 7th Argyll s would pass through to secure the entry onto the Catania plain.

There was not detailed information on the position and the Germans were holding the position in strength taking advantage of the old airdrome defences. The 1st Black Watch game into contact with the enemy before the reached the cross roads but they were able to capture it. Beyond the cross raids an anti tank ditch extended across their front and beyond that the barracks. As a result the battalion went firm. The 7th Black Watch reached the edge of the airdrome and dug in.

The next morning the forward battalion were heavily engaged and as a result the Brigade Commander decided that the 7th Argyll s would move between the two Black Watch battalions to assault Gerbini. The attack took place on the night of the 20th with the Argyll s, supported by armour, advancing on the direction of the railway line to assault the railway station and barracks. The 7th Black Watch on the right advanced to clear up to the railway station.

At this stage General Montgomery decided to shift the main effort of 30 Corps further west and the Brigade was withdrawn behind the Dittaino River.

Account of the action during the Battle of Gerbini between 20/21st July 1943 by Brigadier T Rennie - Brigadier Commander 154 Infantry Brigade. (written 14th August 1943)

Personal account of Dell Porchetta, detailing the attack on Gerbini and eventual capture of 'A' company, 7th Argyll and Sutherland Highlanders, on the night of 20th July 1943.