In early August the 51st Highland Division was recuperating having returned to XVII Corps from Champagne and the Battle of the Marne and was once again in familiar ground north west of Arras.

It was hoped that after its experiences and heavy losses in Champagne a longer period of rest would be vouchsafed to the troops. The days of rest in this period were, however, becoming fewer and fewer, and the whole of the British line was becoming agitated preparatory to uprooting itself and beginning its three months advance towards Germany. This uprooting, as far as the Highland Division was con­cerned, began gradually. It developed from the repeated testing of the enemy's lines, resulting in the occupation of portions of them, and finally culminating in the over running of the whole of the German front system, and in the capture of the main tactical features behind Greenland Hill and Hausa and Delbar Woods.

The various preliminary actions involving the Division commenced on 20 August.

On 21st August command of the Division passed to General Oldfield, General Carter-Campbell having gone home on leave. The General had gone home on the understanding that a fresh Division would undertake the coming attack in this sector. After his departure the Army Commander asked if the 51st would carry out the attack, as it was of the utmost importance to keep a fresh Division in reserve. General Oldfield in these circumstances agreed to undertake the offensive. Accordingly on 21st August an operation was carried out by the 6th Gordon Highlanders (152nd Brigade) with a view to occupying the country lying between the Fampoux-Fresnes and Fampoux-Gavrelle roads for some 500 yards from their junction. This operation, after a considerable amount of infantry fighting in which two companies were engaged, was successfully carried out, an officer, seven men, and three machineguns being captured.

Over the next few days successive actions established the Division on a line running practically due north and south from the eastern outskirts of Fampoux to a point 600 yards southwest of Gavrelle. Four battalions - the 5th Seaforth Highlanders, 6th Gordon Highlanders, and 6th and 7th Black Watch - had been engaged, but had suffered comparatively small losses.

Thus the first of the objectives which the Division had set itself to attain-namely, to establish a firm and regular line from which it could initiate its attack in support of the left flank of the Canadian Corps - had been successfully realised by 25th August, one day before the major operations were due to begin.

While these actions were being fought great developments had taken place in the south. By the 25th August the Third and Fourth Armies had formed a salient of the German positions opposite Arras according to a prearranged plan, and had thus prepared the enemy's strong positions on Orange Hill and about Monchy le Preux for assault. The intention was that the First Army, which prolonged the line on the left of the Third Army, should extend the attack northwards, and by driving eastwards from Arras, with their left covered by the Scarpe and Sensee rivers, turn the enemy's position on the Somme battlefield and cut his railway communications, which ran southwards across the front.

However, the Scarpe in itself could not sufficiently cover this advance as long as Greenland Hill lay in the hands of the enemy. It therefore fell to the lot of the 51st Division to capture this hill and make good the commanding ground on the north bank of the Scarpe, so as to free the Canadian Corps from molestation from that quarter.

It was arranged that the 51st should not attack in force, but should push forward along the Scarpe as the Canadian Divisions advanced and protect their flanks.

Bewsher provides a detailed account of the fierce action over the next 3 days from 27 to 29 August (not included here) culminating in the successful attack on Greenland Hill. The account concludes:

The attack was a complete success in every detail. The enemy posts on Greenland Hill put up a poor fight, in all about twenty prisoners being taken. At 10 A.M. the final objective was reached. Moreover, exactly as had been planned, the enemy south of the attack, seeing Highlanders on Greenland Hill, and advancing along the railway towards Plouvain, and knowing that they could only extricate themselves along the banks of the Scarpe, evacuated their positions, fearing lest that exit might also be closed to them.

The 152nd Brigade followed close on their heels, and captured 1 officer and 15 other ranks who had left their withdrawal too late. At 1 P.M. our artillery ceased shelling Hausa and Delbar Woods, and at 2.20 P.M. the 6th Seaforth Highlanders had reached their eastern edges.

Thus, like many other places that had for some time been a bitter thorn in the flesh, such as the Brown line at Arras in April, Fleaquières in November 1917, and Espilly and the Bois de Coutron of more recent memory, the formidable Hausa and Delbar Woods ultimately fell undefended.

After occupying the woods, the 6th Seaforth Highlanders continued their advance and occupied a line of trenches about 1500 yards west of Plouvain, capturing another eight prisoners. 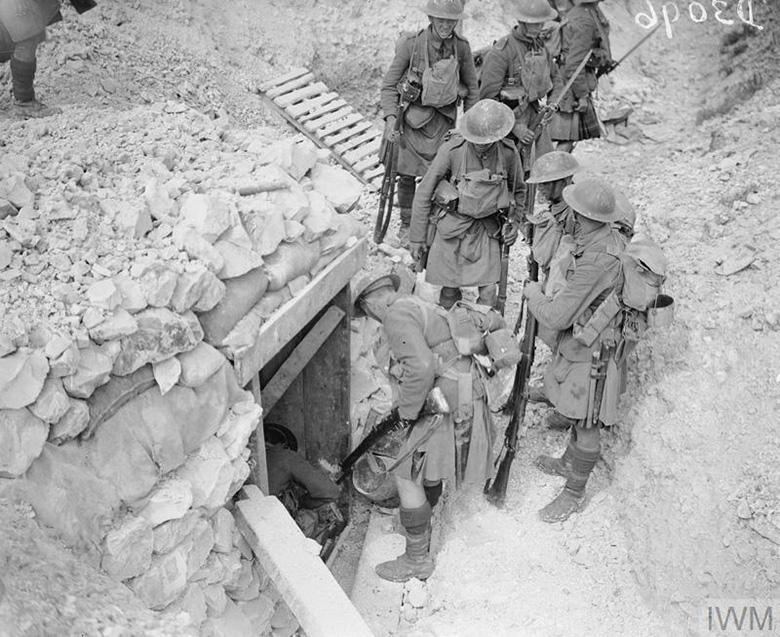 6th Seaforth, Battle of the Scarpe

Capture of the Greenland Hill by the 51st Division. Daylight patrol of the 6th Battalion, Seaforth Highlanders working forward towards Hausa and Delbar Woods. North-east of Roeux, 29 August 1918. Troops firing into a dug-out in a deserted German trench to dislodge any remaining Germans. By kind permission of the IWM. Q7112.

During the attacks against Greenland Hill the Division was placed under orders of Lieut.-General Sir A. W. Currie, K.C.B., K.C.M.G., commanding the Canadian Corps. On the return of the Division to the XXIInd Corps, on 30th August, General Oldfield received the following congratulatory message from General Currie :-

"Now that the gallant 51st Division is passing from my command, may I be permitted to say that I shall always remember with the greatest pride that for six stirring days you formed part of the Canadian Corps. I remember very well when the Division first came to France in May 1915, and that we took part together in the fighting at Festubert and Givenchy. Again we were associated in the memorable battle of Arras in April 1917, and now again we have kicked off side by side in an advance the results of which I have every reason to believe will be far-reaching. That your Division was able after the continuous fighting in which it has been engaged this year to take and keep the strong position of Greenland Hill, testifies in the strongest possible manner to the fact that the fighting qualities of the 51st are second to none in all the Allied armies.

"On behalf of the Canadian Divisions I thank you most sincerely for the splendid help and support you have given to the main advance south of the river. I wish you all the best of luck always, and have every confidence that the splendid reputation that the Division now enjoys will ever be maintained."

The Gordons and Greenland Hill [ Extract ]