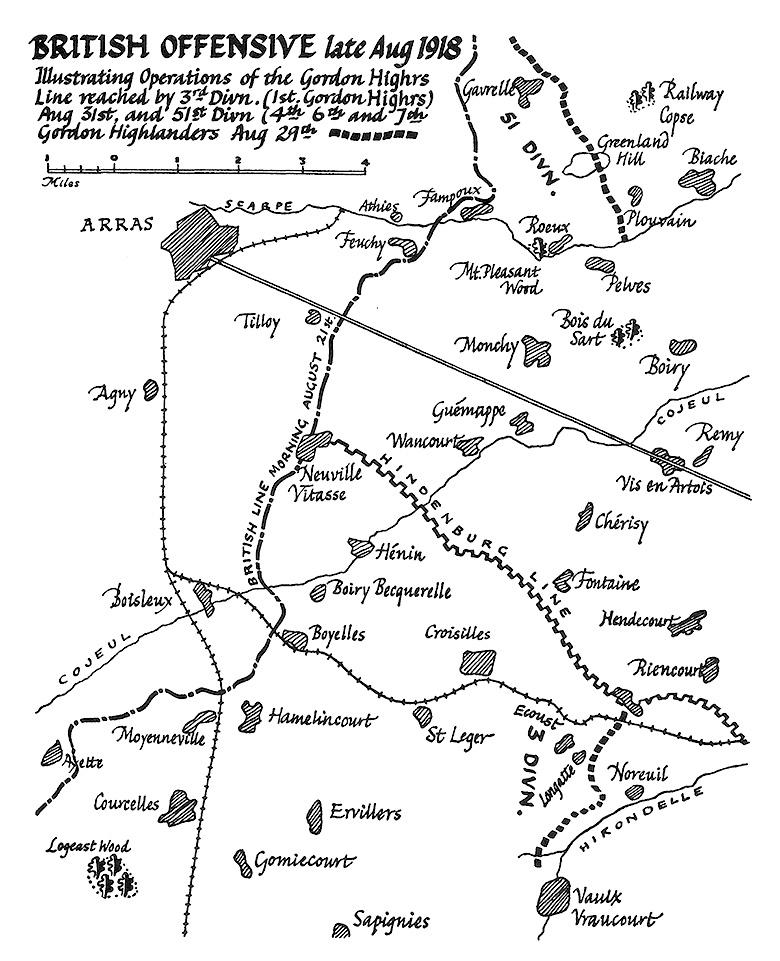 An illustrated map showing area of operations of the Gordon Highlanders in late August 1918 during the Second Battles of Arras.

August 26th was, as already stated, the day of a rf a major offensive by the First Army's right wing. South of the Scarpe the Canadian Corps was to take Monchy-le-Preux, a famous and much disputed point of vantage. The 6th Gordons were to co-operate by covering its left flank. This task, the brigade commander, Brig.-General W. H. E. Seagrave (#1), understood to be only temporary, having been told that a fresh division would shortly relieve the 51st, still tired after its gruelling days in the Battle of the Marne and not yet fully brought up to strength. In fact the 51st carried out a highly important attack.

From the north side of the Scarpe the 6th Gordons watched the Canadians walking majestically behind a colossal barrage straight over Monchy. The Gordons themselves advanced at 10 a.m. Apparently in order to avoid risk to the Canadians their right moved without a barrage. Their first objective lay just beyond Mount Pleasant Wood, near Roeux Château - the very ground over which the 51st Division had advanced in the Battle of Arras in 1917. They did not quite reach the second but did reach a line running north from Roeux. An acrimonious discussion now took place with brigade headquarters, which believed the report of the I53rd Brigade that it had reached the summit of Greenland Hill. Lieut.-Colonel J. G. Thorn believed his eyes, which told him that this was not so. He therefore resisted all demands that he should try to push on further, with the risk of being "pocketed" by the Plouvain lakes ahead and exposed to fire from the high ground on his left.

He was right about the situation. The 153rd Brigade had, however, begun a fine and memorable advance. The 7th Gordons moved in support to the other two battalions of the brigade. When the battalion passed through it was held up rather short of the summit of Greenland Hill by very hot fire. The attack was renewed on August 27th, when the 6th Gordons reached their second objective and the 7th crossed the summit of Greenland Hill. A counter-attack then drove them back to the trenches taken on the previous day.

Yet the summit was to fall to the Gordon Highlanders, though the 7th Battalion had not been able to hold it. The I54th Brigade on the left now extended its flank southward in order to cover this objective. On August 29th the 4th Gordons carried the hill and established outposts well down its eastern side. Ninety prisoners were taken at relatively small cost. The loss was, however, increased by a big bombardment later in the day so that, counting men gassed, it reached a total of 109. Those of the 7th Battalion had been almost the same 104 .