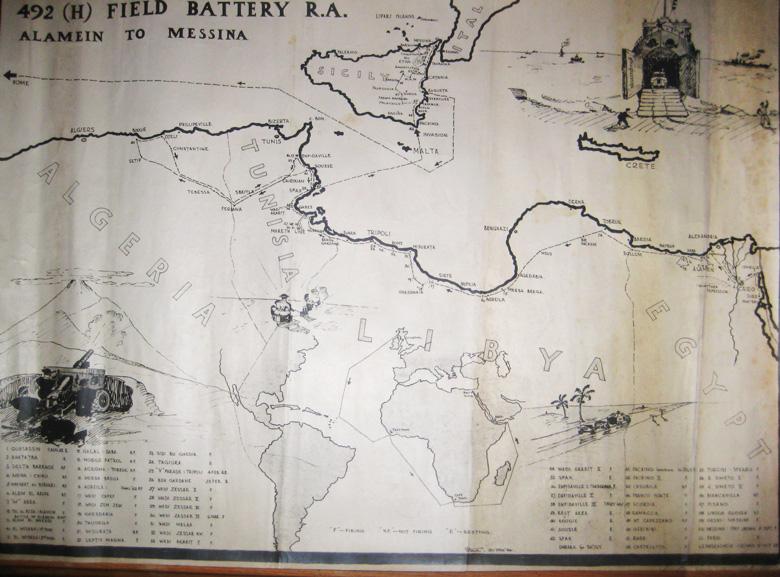 BATTLES FOR GERBINI, SFERRO HILLS, CATANIA PLAIN AND BIANCAVILLA.
A description from the History of 128th (Highland) Field Regiment R.A

The crossings at the River Dittaino were secured and General Wimberley gave his attention to the capture of Gerbini, and included the railway station, barracks and aerodrome. The battle plans for the Argylls and Black Watch (154 Brigade) were detailed, but things did not go according to plan.

The enemy had massed his artillery and used it with great effect on our troops in the areas. Our C.O., Jerry Sheil, prepared intensive fire programmes in support of the 7th Argylls' attack at 22.00 hrs. and by daybreak we had our objectives. A fierce counter-attack by the enemy allowed them to regain ground, even in spite of heavy artillery fire from the 127th, 128th and 93rd Medium Batteries. Capt. John Connel had his F.O.O. with the Argylls 'and later Jerry Sheil, with Capt. D.H. Johnstone (temp. O.C. 307 Battery), were observing for 154 Brigade forward troops. Information came through that Capt. John Connel and L/Bdr. F.W. Nicol had both been wounded, but no details were available. Next day Lt. J.T. Mclnnes went forward to replace him, it was then he heard that Capt. John Connel had gone on foot with the Argyll's C.O. and during which time he was wounded. We later had a report from the medical aid post that he had died from the wounds in his chest. L/Bdr. Nicol had followed in his scout car but was caught in an ambush from which he fought his way out using a bren gun but was wounded in the fighting.

The Regiment now supported 152 Brigade near Castellito and we had an air O.P. (Capt. Morgan) attached to us. He located enemy artillery and infantry positions which became targets for counter battery work by our guns.

The battle for Gerbini was not an easy one, and the Germans fought every step of the way, with attacks and counter-attacks. General Wimberley stated that emboldened by the speed at which we had gone forward, we were now too hasty and took rather a bloody nose. Most of our O.Ps. were dens of Hell where shelling, mortars and machine gun fire often made positions very precarious and difficult. Sgt. Bob Edmonds spoke of his experience in the anti-tank ditch before Gerbini with the Black Watch and everyone really tired out. The Jerries were in holes in the ground about 300 yards in front of our O.Ps. We attacked, the infantry advance began, our barrage screamed overhead but the opposition was tough. The barrage lifted and the Black Watch moved up the ditch on the other side of the wire, and before long we had gained the day. We moved to high ground near Mt. Capezzano and as the Jerries retreated it was destruction everywhere - enemy guns, burned out vehicles and many dead and wounded Germans lying about. We finally met the Black Watch and realised what a really tough fight it had been, and although we were all tired, they were the victors of Gerbini.

So much for the O.Ps., but what of the guns? We were effectively established at Monte Trucisi, but refrained from firing except in retaliation to effective enemy shelling as the 51st. Div. prepared for their attack on the Sferro Hills positions. Guns had been dug in by bulldozers and hundreds of rounds of ammunition were dumped at each gun site. We had an O.P. on top of Mt. Giovani to locate hostile batteries and other information relating to the coming battle. Zero hour was set for 02.00 hrs. and Capt. Webley, Capt. Henderson and Lt. Root were forward with the Seaforths and Camerons. This was a fierce battle with many enemy infantry and tank attacks which were all successfully beaten off. By 23.00 hrs. on 1st August the 2nd Seaforths were on their objectives and by midnight both 152 and 154 Brigades had occupied and established their positions on the new line.

Next day the enemy had fallen back and our targets were all at long range, with our infantry advancing in all directions. We found eleven 150 mm Italian guns, all out of action as a result of our counter battery fire. They had been spotted by Jerry Sheil previously, and Capt. Webley successfully engaged them as a destructive target.

Both the 51st Division and 78th Division (on our left) continued to advance towards the Simeto River. The C.O., on reconnaissance in his jeep, was seen and shot at by an enemy anti-tank gun, and during the action his driver, L/Bdr. R. Ellis, was killed.

The advance continued through Sferro and along the axis route of the 154 Brigade to good positions which overlooked both the Simeto River and the Catania Plain.

Description of the Battle for the Sferro Hills, late July - early August 1943