Account of Artillery at El Alamein
Extract from "The Quiet Gunner At War" by R. Gorle MC RA

Extract taken, with kind permission, from "THE QUIET GUNNER AT WAR" (El Alamein to the Rhine with the Scottish Divisions) by Richmond Gorle MC RA. Published by Pen and Sword Books in 2011.

Major Gorle was second in command of 128 (H) Field Regiment RA on the eve of El Alamein.

The sun went down as we finished our meal and walked across to the command post. Having no immediate duties, I stood for a while and watched the night descend on us. As the last glow of the sun faded, the sky paled and then quickly darkened to midnight blue, silver-pointed with stars. It seemed too calm and beautiful for death to be abroad. As I watched, the eastern sky glowed gold and suddenly, with startling haste, the full moon floated over the horizon and glided into the canopy of blue. And what a moon! ... brilliant, gilded copper, flowing with frozen fire. Her light streamed over the desert and transformed it to a place of magic beauty. It was truly magic, for no magician could have shown a more deceptive scene: the smallest detail of the landscape seemed to be revealed before one. But the deep shadows contrasting with the brilliance played tricks, hiding many things while showing others that were not there at all.

A sudden burst of gunfire shattered the peace as I turned to go into the command post, and for a moment or two we wondered if the enemy was going to get his attack in first, but it proved to be only a short 'hate', which soon died down and left the peace of the night undisturbed.

The Command Post - the nerve centre of the Regiment - was a six-foot-deep trench roofed with poles and corrugated iron and covered with a thick layer of sand. A recessed shelf served as a table for the maps and telephones and other implements of war. Dan Ridley, the Adjutant, was quietly checking that our fire plan data was right and occasionally talking to someone by phone. Next to him was 'Gubby' Allen, bespectacled, solemn and tough. He was the Survey Officer, whose work could make or mar the Regiment's accuracy. In a corner a wireless set was chuckling away to its signaller, filling the dugout with speech now and then, when one of the OP Officers called up to give us news. At the far end sat the Colonel, watching and waiting.

One could imagine the final preparations being made at the batteries - a drop of oil on a breech-block, one more box of ammunition opened and the shells stacked ready, a peep through the sights to confirm that the crosswire was dead on the aiming lamp, and then there remained but to wait. Slowly, the minutes ticked by, though the watch hands seemed never to move. This was the apex of all that we had trained for and tensely we wondered how good we should prove to be. Outwardly calm, we were inwardly keyed to a pitch of excitement that tightened the chest and quickened our pulses to racing speed. Away in the west the Germans and Italians were settling down for another peaceful night.

Dan stared hard at his watch - it was nearly time. 'Stand-by!' said he to the phone, and the men on the guns stiffened. It was 9.39 pm. Just one more minute to wait. 'One-oh seconds to go ... Five ... four ... three ... two ... one ... FIRE!' The flame of the hurricane lamp popped up the chimney, a cascade of sand fell on the plotting board and the world seemed to fill with concussion and noise. A thousand guns had fired as one. 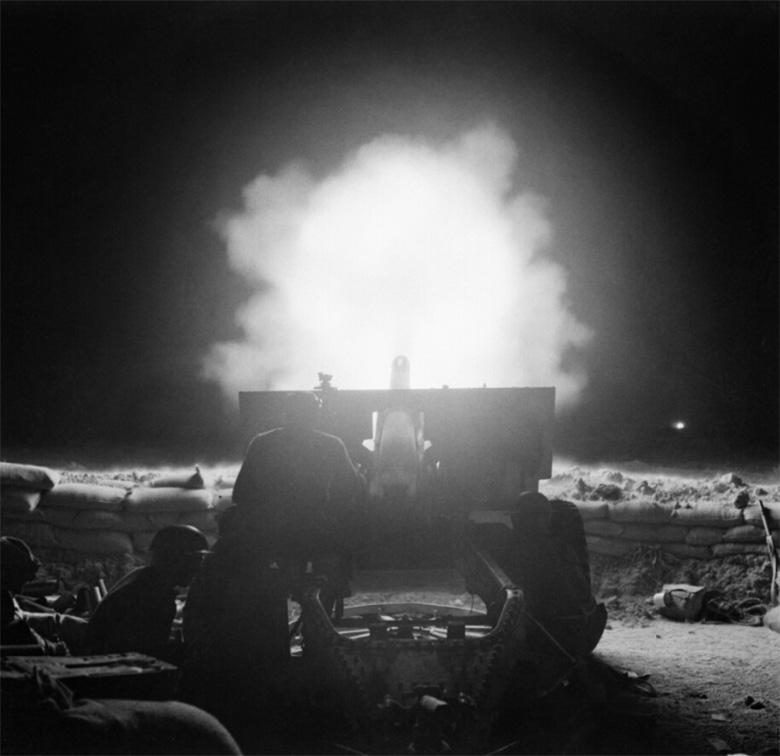 A 25 pound gun firing during artillery barrage which signalled the beginning of the 2nd Battle of El Alamein, 23rd October 1942.

Outside, the night was filled with flickering lightning; the air throbbed with a majestic rhythm as from gigantic drums that rolled and crashed unendingly. To the north, to the east and to the south, wherever one looked there were flickering flashes. When guns near us fired, the moon paled and the desert was bright as day, with every detail momentarily picked out in brilliancy.

There were flashes in the west also, but they were insignificant compared with ours. Our guns had smothered the enemy artillery and gagged them by smashing their cables. It was a full forty minutes before they could make an effective reply. Through the din, intensifying it, we could hear the shells from guns behind us passing overhead in droves, moaning and screaming and whistling as they hurtled to their destruction and the enemy's.

A soldier might have described that mighty barrage passing over his head as the noise of many wings, and the couplet of the old poem might have come back to his memory:

"The angel of Death spread his wings on the blast,
And breathed in the face of the foe as he passed." [Lord Byron]

For twenty minutes this avalanche was directed at the enemy guns. Then, at 10.00 pm, the range was shortened and the bursts tore into the forward positions. That was the cue the Infantry had been waiting for.

The sappers had already been making gaps in the deep belt of mines, and through these the infantry advanced. The distance to the final objectives was over three miles, though it was not expected that we could penetrate as far as that in one night. The aim was to break the back of the defence by dawn and then to dig in and hold fast until another attack could be launched.

The 5th Camerons were given the job of forming a firm base on the far side of the minefield. News that this had been done reached the Division from Jim Inglis, our OP Officer with them. Then his wireless became silent - he had been killed. Our first casualty, and a great loss in every way. Jim sadly died because when he reached his OP he found that his microphone had been left behind. He was returning to fetch it when he was killed by a mine. His brother John was also with the Camerons and kept us informed of their doings for the rest of the night.

The rest of the Infantry pushed steadily on. Bofors guns of the Light Anti-Aircraft Regiment helped them keep direction by firing streams of tracer shells on either flank, but even so it must have been terribly hard to keep straight in the smoke and confusion. Many were killed or wounded, chiefly by machine-gun fire, but the others pressed on. Resistance was slight where they were able to capture a post just after the guns had lifted from it on the heels of the shelling, but there was plenty of grenade and bayonet work when the defence had had time to recover or had been missed from the fire-plan.

We had two other officers forward - John Connel and Ian Beaton. They were both with the 1st Black Watch, as our two Seaforth Battalions of 152 Brigade were in reserve. They were there to deal with the unexpected, to give flexibility to the fire-plan by calling in reserve guns to deal with emergencies. They were there too to tell us what was happening, and where the Infantry had reached. Information of this kind is vital in war. The plans of the General depend on its accuracy and freshness. Much depended on these officers, both under fire for the first time, and well indeed they rose to the occasion. At first their reports were frequent and full. The picture they gave was one of steady progress under heavy fire. But the battle grew more and more mixed and confused as they penetrated more deeply and their messages grew more and more vague. At last they told us that the Infantry were digging in. The final objectives had not been reached, but they were consolidating where they were. Where that was, no one knew.

So ended the first night of the Battle of Alamein. For our part, we fired for five hours and twenty minutes, and each gun fired four tons of shells. Not one shell came near us, so for the men on the guns it was just a sort of endurance test. At the end they were deaf from the noise and half-dead from weariness, but they had smoothed the path of the Infantry and were largely responsible for the victory, for Alamein was a gunner triumph.

At 3.00 am the last round was fired and there was silence in the batteries - a silence that rang in our ears.

Extract from "The Quiet Gunner At War" by R. Gorle MC, of 128 Field Reg. RA, describing the guns at El Alamein