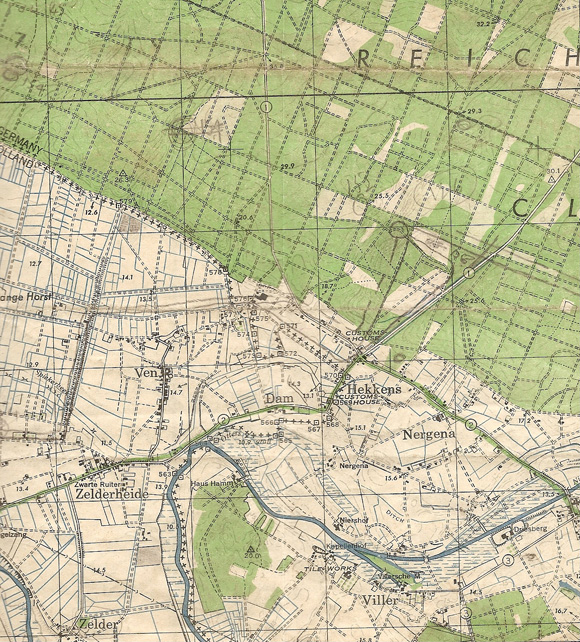 The providence of this map is not known and hence the pencil marks cannot be dated. However, the objective axis and start line are clear.

The town of Hekkens on the southern edge of the Reichswald lay on the important intersection of the Gennep-Cleve and Kessel-Goch roads. It was also on the Siegfried Line and was therefore heavily defended with pill boxes. The town also sat on the proposed corps axis and therefore had to be cleared. The 154 Brigade History takes up the story:

"At a Corps conference held during the night 10th/11th February, the Divisional Commander was informed that, further north, the important road centre town of Cleve had been captured but as the road leading to it from Nijmegen had been completely flooded, it was of vital importance that the road running north-east from Gennep through Hekkens and the Reichswald to Cleve should be opened up and made available for use, as the main Corps maintenance route, at the earliest possible moment. This necessitated the capture of Hekkens which was still in enemy hands and which was being strongly defended.

During the morning of 11th February 152 Brigade, who had been fighting strenuously in the Forest area north and north-west of Hekkens during the two preceding days and who had succeeded in cutting across the main road running through the Reichswald from Hekkens to Cleve, attempted to continue their advance into Hekkens itself but were unsuccessful in this attempt.

Hekkens lies at the southern edge of the Reichswald where the main roads Gennep/Cleve and Frasselt/Kessel/Goch cross and the village itself is bounded on the south by the Rivers Niers, a tributary of the Maas and which runs from east to west at this point. The enemy obviously fully appreciated the importance of Hekkens, and were defending it strongly. The defence overprint maps showed a considerable number of concrete defences in the area as the Siegfried Line runs through the village and into the Forest east of it. The Divisional Commander accordingly decided to launch a full scale Brigade attack against Hekkens during the afternoon and he ordered 154 Brigade to carry it out. The Brigade Commander was informed that the whole of the artillery deployed in support of 30th Corps would be available to support the attack.

As it had already been found, earlier in this operation, that it was practically impossible to carry out a successful attack by night through the Reichswald on account of the density of the woods, it was essential that the attack should be launched in sufficient time to enable the objectives to be captured before dark. As the orders to make the Brigade attack were only received about mid-day, time was very short and the Brigade Commander accordingly decided (first) to launch the attack at 15.30 hours which would give about one and a half hours of daylight in which it could be completed, and (second) to make the simplest possible plan, as the Battalions which had to make the attack had to be brought forward a considerable distance to the forward part of the area now held by 152 Brigade and could only arrive there a very short time before the attack had to be launched. There would accordingly be no time to carry out the necessary preparations for anything except the most straight-forward type of attack. The Brigade plan accordingly resembled rather the 1914/18 war type of infantry attack than the normal type of attack which had generally been carried out during this campaign. A convenient forest track running south-east across the main Hekkens/Cleve road and about 2000 yards north east of Hekkens made a suitable start line and the main road leading into Hekkens made a suitable axis of advance down which the two attacking Battalions would advance, one on either side of it. 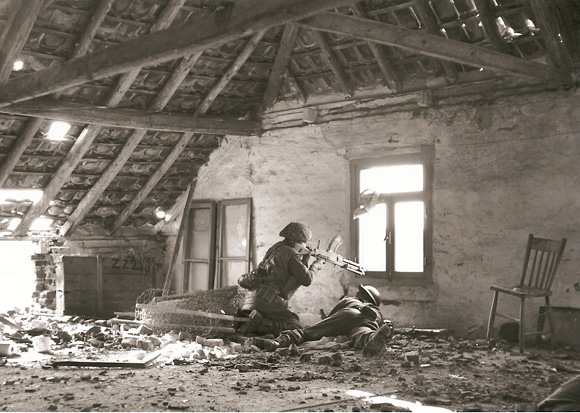 Bren gunner in action from a window of a house when they were observing and giving covering fire for their comrades advancing below. C Coy, 5 Black Watch, 153 Brigade. Sgt Silverside 14 February 1945

The attack was to be made behind extremely heavy artillery concentrations, fired by the whole Corps artillery, which would lift at the same rate as the infantry would be able to advance through the thick woods which lay on either side of the main road. In addition to the medium and field regiments supporting the attack some heavy artillery was also available and were given the task of neutralising, as far as possible, the Siegfried Line defences in the Hekkens area as shown on the defence overprint. 1st and 7th Black Watch were given the tasks of the two attacking Battalions (the 1st on the left and the 7th on the right) and 7th Argylls were ordered to carry out an immediate advance south-east down the start line forest track in order to protect the exposed flank of the attacking Battalions during their forming- up. The two attacking Battalions had meanwhile been moving forward to the start line area and arrived there less than half an hour before the attack was due to start. There was no time to brief the troops in the detailed manner generally carried out and it was only possible to tell them the direction of the attack, the depth to which it had to be carried out and to emphasise that it was of vital importance to the success of the attack that they should keep up as close as possible behind the timed artillery programme which was to lift forward at the same rate as they would be advancing.

The attack started at 15.30 hours and the noise of the opening concentrations from the very large number of guns (field, medium and heavy) supporting the attack as the shells burst in the trees in front of the attacking troops was deafening. The leading troops kept so close behind the artillery concentrations that they over-ran the enemy positions before the defenders had time to come up above ground again and defend themselves and the attack was completely successful. By 16.50 hours Hekkens had been entered and by 19.00 hours both Battalions were firmly on their objectives and had taken a total of about 200 prisoners, all of the German Para Korps which was recognised to be one of the enemy's most formidable fighting formations."