An account of the operation to take a ridge called Djebel Roumana at Wadi Akarit on 6th April 1943. This account is taken from "OPERATION SCIPIO - THE 8TH ARMY AT THE BATTLE OF THE WADI AKARIT" by kind permission of the author B. S. Barnes. 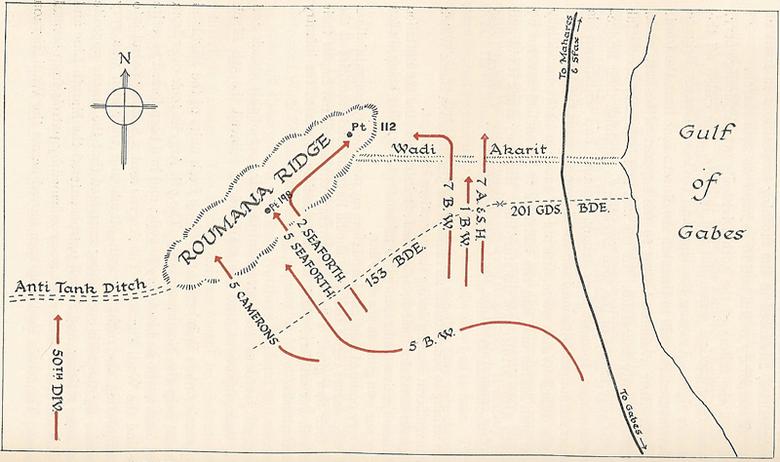 "Our short rest was over, we moved forward some twenty-five miles to relieve the New Zealanders in the bottleneck where the Wadi Akarit crosses the plain between the mountains and the sea. Beyond rose a rocky ridge perhaps six hundred feet high called the Djebel Roumana; and here the Germans were likely to make their next stand. 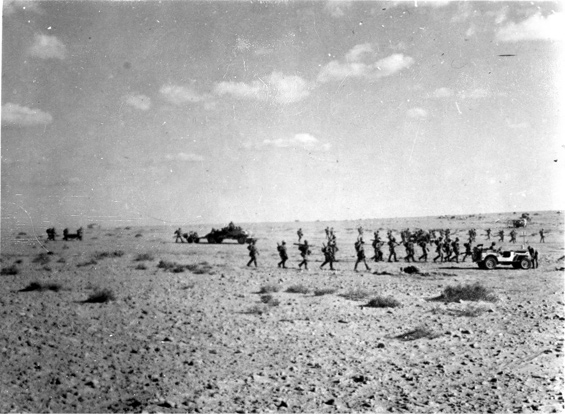 Men of the Seaforth Highlanders moving into position at Wadi Akarit., April 1943

"We reached our new area after dark and when morning came we found that the Spring rains had performed their annual miracle and before us lay a carpet of wild flowers, stretching away to where Roumana stood in a blue haze, quivering in the heat. The ridge apparently overlooked our every movement, but at such a range that we soon learnt to live with it as the next few days passed in patrolling forward and other preparations for the attack.

"This was fixed for the early hours of 6 April and it was to be a 'silent' attack - that is, without artillery preparation, in the hope of gaining surprise. 152 Brigade objective was the Roumana ridge, whist 154 Brigade on our right were directed up the main road. 5 Seaforth were to take the centre of the ridge, which was the commanding feature, whilst 5 Camerons on our left attacked the west end. 2 Seaforth, initially in reserve, were to pass through us and swing right to take the east end. This turned out to be a hard-fought engagement which well merited the Battle Honour 'Wadi Akarit' awarded the three battalions after the War.

"My own part in it was undistinguished but I shall describe it in some detail because it exemplifies the kind of silly things which can go wrong on such occasions, with potentially serious results.

"It was common for a Second-in-Command to be left out of an attack in case the C.O. should be hit, and it occurred to me later that this was probable in my case; but at the time I sourly felt that I was just becoming the brigade odd-job man.

"I was given two tasks; the first to find and mark a route across country for the battalions to reach their forming-up positions, and the second to marshal the anti tank guns and fighting echelon vehicles of the brigade and pass them through a gap in the enemy minefield which the divisional engineers would make once the battle had started.

"To provide a firm base for the attack, 1st Gordons had filtered forward by night into the Wadi Akarit itself, which cut a six-foot-deep gash across the plain to our front. Our forming up position was to be beyond this, in full view from Roumana by day, so I met the three Battalion LOs in the wadi before dawn in order to reconnoitre our route in the half light. The air was fresh, the flowers covered in dew and the birds just starting their dawn chorus. It was an idyllic scene until we were brought rudely back to earth by the arrival of a shell a hundred yards in front of us.

"Seconds later another dropped fifty yards behind us and we knew we were bracketed, so flattened ourselves while they loosed off a few more - none very close. The gun was a small one, and really it was all in the nature of a gentle reproof to the five of us for walking about in a group once it was light enough to be seen. We retired one by one and were not troubled further. On later occasions, I found that a lone figure in the middle distance was seldom regarded as worth a shell; and this was a handy thing to know. As we retraced our steps the Provost Corporal and I brought up the rear, knocking in pegs every hundred yards on which he was to fix screened lamps that evening.

"The rest of the day passed in making arrangements for my second task and in finding a suitable spot to do it from. This done, I left Hamilton and Fulton digging doovers there for the three of us and returned to Brigade towards dusk to meet the section of military police who were to mark the route we had pegged.

"There followed an exasperating delay when half of them got lost coming up on their great flat feet, and when they had at last begun to fix up their lamps word reached me that the Brigadier was talking of altering the route. With darkness falling and the battalions already on the move I hurried back to find out what was up.

"George Murray had become increasingly irritable and indecisive of recent weeks, and this cannot have made things any easier for Ian Robertson, who had taken over from Harry Cumming-Bruce as Brigade Major only the previous day. After a lot of talk, George finally made up his mind to abandon the route he had laid down in his orders and to follow instead a telephone cable which his signallers had laid the previous night. He then retired, saying he did not wish to be disturbed until the Battalions were formed up.

"In a night attack it is vital that the units should keep proper direction and formation. There was an established battle drill to assist this whereby they were formed up on previously laid white tapes, so as to cross the Start Line in good order. This may seem a bit of military mumbo-jumbo, but when you consider that in forming up a brigade attack you are dealing with numbers comparable with the Queen's Birthday parade on The Horseguards, but on strange ground in the dark and in silence, you can appreciate the problem. Furthermore, the units are in tactical formation rather than in nice straight ranks.

"John Thornton, the Brigade l.O, had been made responsible for laying out the tapes and for directing the battalions onto them as each arrived up the approach route. Now that this route had been changed, we agreed he should set off at once up the new one with his guides whilst I rushed off to intercept the leading battalion, 5 Camerons, who had already started up the original one.

"Ronnie Miers their CO; was not normally noted for his patience, but he took this change of plan without exploding and, more by good luck than anything else, we found our way across to the new route, up which I led the way running the telephone wire through my fingers and praying that it would not suddenly come to an end in my hand.

"In later night attacks, I found that a cable if correctly laid, was in fact the best way of marking such a route. Not only was it something tangible but also it could be laid one night, left in position by day without the enemy seeing it, and then be supplemented with white tape the next. On this occasion, the cable seemed endless and sometimes I could have sworn it was leading in quite the wrong direction, but eventually it ended in roughly the right place. To our dismay, however, there was no sign of John Thornton or his guides. I had visions of the Brigade being caught disorganized on the open plain at H-Hour and I began to sweat. To make matters worse, our tanks had started moving somewhere in the rear and were making so much noise that we felt the enemy could not fail to realize that something was on.

"Eventually John did turn up, having lost his way on the featureless ground in the dark - a thing that could happen to anybody, but which nearly had serious consequences this time. By then battalions had more or less sorted themselves out on their own and all was ready, although it was now 1 am - two hours later than planned - and the troops had that much less rest before H-Hour at 3.30am. Not that they were likely to get much sleep, lying on the ground in fighting order, and with battle looming.

"Having reported progress to Brigade I made my weary way across country to the scene of my next task, a mile or two away. This was on a low ridge which overlooked the whole battlefield from a respectful distance and I lay huddled in my doover there for an hour or so, watching anxiously to see if the battalions got across the open plain without being spotted. Miraculously, in spite of flares dropped by enemy aircraft they seemed to manage it and there was not a sound from Roumana until, with an almighty crash, our barrage opened on the ridge at 4.30am.

"Until dawn came there was little to be seen up there beyond the flashes of bursting shells, but in the meantime I made contact with the Sappers and found that they had managed to clear two gaps in the minefield; which was a very good effort under the heavy fire which came down on them.

"Once daylight came, I lay with my glasses fixed on Roumana, but not a man could I see amongst the clouds of slate grey smoke and chestnut dust which cloaked the entire ridge as the German guns and mortars hit back. Beneath this, as I afterwards learned, there was hard fighting amongst the rocks as first one side then the other gained the crest.

"This continued all day, and for eight hours of it the main objective was held, against repeated counter attack, by Jack Davidson, a Caithness sheep farmer of sterling character, and just twenty men of his company. His well deserved DSO was among several decorations won that day; a day which cost the battalion ten officers and over a hundred men killed or wounded. 2 Seaforth suffered even more heavily and, apart from Battalion Headquarters, had only four officers left by evening."

An account of the operation to take a ridge called Djebel Roumana at Wadi Akarit on 6th April 1943. This account is taken from "OPERATION SCIPIO - THE 8TH ARMY AT THE BATTLE OF THE WADI AKARIT" by kind permission of the author B. S. Barnes.