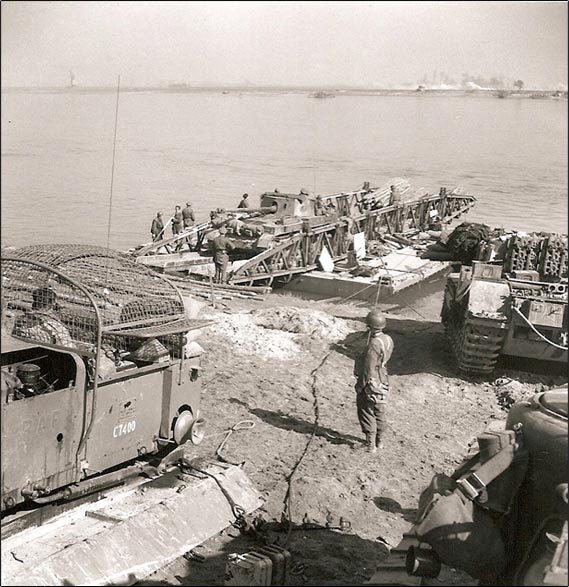 Self Propelled Gun on Raft

An Archer 17-pdr self propelled gun of Highland Division Anti Tank Regiment being loaded onto a raft. An RAF balloon winch is seen in the foreground. Sgt. Palmer 24th March 1945.

153 Brigade crossed in the area of Rees, with two battalions up, 5 Black Watch on the left and north of Rees and 5/7 Gordons to the right and south of the town. 1 Gordons would follow behind 5 Black Watch once the latter's Buffaloes had retuned over the river.

By mid morning 5 Black Watch had taken Esserden. 5-7 Gordons successfully established themselves on the island between the River Rhine and the Alter Rhine to the east of Rees, but were very exposed to German snipers beyond.

One attempt to cross the Alter Rhine failed but the next night (25/26 March) with 5 Black Watch having successful secured southeast Rees with the bridges still intact, 7 Gordons were successful. For more details see the Extract from 5-7th Gordons War Diary Op Plunder - March 1945.

On landing 1 Gordons secured a group of farm buildings but quickly had to evacuate some of them when the Germans set them on fire. They pressed forward , clearing a bund and housing estate, and reached the Rees-Speldrop road by 0700 hrs. They now swung south east as planned towards Rees. B Company secured the cemetery on the northwest edge which would also secure C Company's flank as they moved into the town. 5 Black Watch were meanwhile moving into the town from the east.

The opposition, two parachute battalions, was stiff and well prepared. Despite good progress by midday there was still much to be cleared. The Commanding Officer sought agreement to delay the remainder of the clearance until shortly before first light the next day but because Corps wanted Rees taken as the highest priority this was not sanctioned. The attack was resumed at midnight and progress was good so that by first light 1 Gordons were poised to finish off the German opposition.

The commanding officer anticipated that he could clear the riverfront by 1130 hours and indeed it was done well before that time. However, he anticipated the last elements in the town being cleared by 1500hrs and in this he was proved wrong. The resistance was fierce and it was only as darkness fell that the last elements on the eastern edge of Rees disappeared.

During the morning the Commanding Officer, Lieutenant Colonel Grant-Peterkin, was wounded by shell fire and Major Lindsay took over. The latter's diary published under the title "So Few Got Through" (link to bibliography) provides a fascinating account of this action and the progress of 1 Gordons for Day until the end of the war.