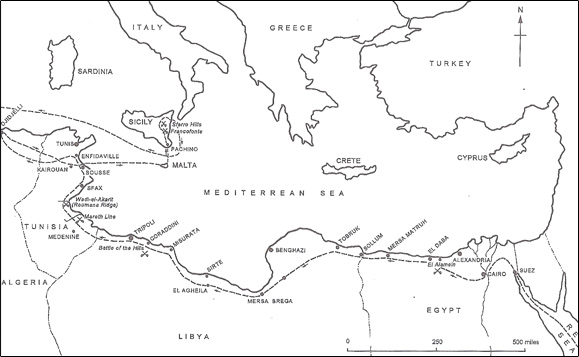 Diagram depicting the route of the North African campaign.

In August 1942 the division set sail for Egypt and the North Africa Campaign. The Division disembarked on 14th August 1942 at the entrance to the Suez Canal. After acclimatisation they took up positions to defend the western approaches to Cairo. 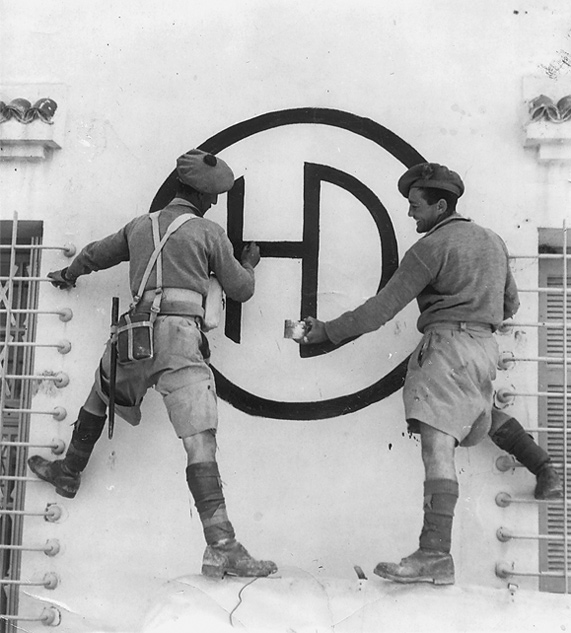 Privates James Bruce and Alex McMichell living up to the nickname of the "Highway Decorators". This nickname given to the division by other divisions who became used to discovering the "HD" insignia painted wherever the Highlanders had passed through.

The Division was moved forward in preparation for the attack into defensive "boxes" 25 miles east of El Alamein. The attack commenced on the night of 23/24 October. The battle concluded on the 3rd November with the 7th Argylls of 154 Brigade taking the strong point of Tel El Aqqaqir to find that it had been abandoned by the enemy.

The initial pursuit was hampered by rain but Tubruk was taken on the 13th November. The Division enjoyed a period of reorganisation before joining the advance. An attempt to outflank Rommel at El Agheila failed when Rommel withdrew leaving only a rear guard.

The 51st Highland Division attacked along the cost with the New Zealand Division and 7th Armoured Division carrying out a flanking attack. Failure to succeed would have caused Montgomery to have to fall back. The battle called the Battle of the Hills lasted from the 20th to the 21st January. General Wimberley carried out his own successful flanking manoeuvre, moving down the coast to get behind the enemy. On 23rd January the lead elements of the Division entered Tripoli.

Rommel's next defensive line was the Mareth line. This was formed at the narrow point between the coast and the Matmata hills.

The Mareth line was formed between the coast and the Matmata hills. The division was deployed covering the approaches to Medenine. The enemy attacked on 6th March and was defeated and preparation began for the assault on Mareth. The battle commenced on the 20th March but a key part of the plan involving 50th Divisions failed and the attack was called off on the 24th. The action continued and on 28th March the enemy facing 51st Highland Division had withdrawn. The advance continued.

The Wadi Akrit formed the next natural defensive position on the coast. Three divisions were to be used with the 51st nearest the coast. The Division assaulted the Roumana Ridge and the Wadi. The attack commenced on 6th April. By the night of the 6th the position was taken but the battle had been hard fought with the loss of many casualties. At dawn the enemy had gone.

In the wake of the Wadi Akarit the armour took up the pursuit. The first Army was approaching Tunis from the west. Enfidaville was attacked by the 8th Army on the 19/20th April. Despite the capture of the town the enemy retained a strong position inland. General Wimberley temporality handed over command when he was called away for planning conference for what was, although it was a closely guarded secret, the assault on Sicily. While the 8th Army held its ground the US forces and 1st Army successfully assaulted Tunis on the 6th May concluding the campaign. 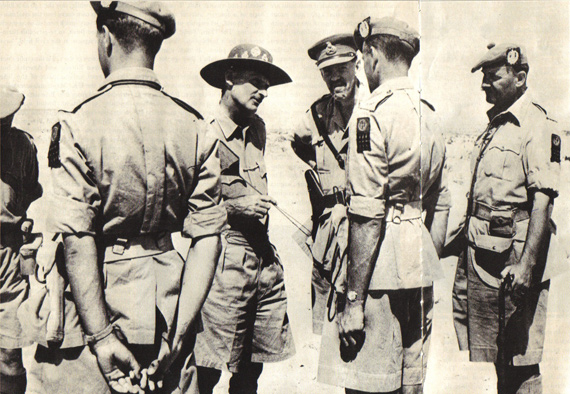 Montgomery and the 5th Camerons

General Montgomery and the GOC with 5th Camerons.