Taken from The History of the Fifty First (Highland) Division 1914-1918 by Major F.W. Bewsher D.S.O., M.C and The Spirit of the Troops is Excellent by Derek Bird.

During the afternoon of 20th March a scout of the Black Watch, lying out in No Man's Land, observed between 6000 and 7000 men, not wearing their packs, enter the enemy's trenches. It was therefore evident that the enemy was assembling for the attack; and all active guns, with some additional batteries of the corps heavy artillery, opened on his assembly positions and on the Agache valley.

"At 4.40 a.m. on 21 March 1918 the Germans unleashed a terrifyingly violent artillery and trench mortar bombardment using both high explosive and gas shells. Their great attack, Operation Michael, also known to the Germans as 'Die Kaiserschlacht', the Kaiser ' Battle, had 'begun. More than 6,400 artillery piece and 3,500 trench mortar opened fire on a front of 50 miles with the aim of destroying the Allied lines. The Fifth Army behind its week defences in the south was most vulnerable, but the Third Army, in which the 51st Division was serving, had the advantage of being stronger positions. From the Highlanders' perspective the bombardment extended as far as they could see and was seeking out the trenches, strong points, headquarters, artillery batteries, villages, roads and other places of importance. The bombardment continued for four hours and the smoke, gas and a morning mist conspired to help the German infantry when they surged forward from about 9 a.m. onwards." Bird

The exact happenings when the German infantry were first encountered are not known, as none of the 6th Black Watch in the front and support line survived. These unfortunate men were subjected to a continuous bombardment of over four hours, which was concentrated on the trenches they occupied. If any of them survived the ordeal, they must have been overwhelmed when the masses of German infantry emerged through the fog.

The enemy's plan of attack is, however, clear. By a tremendous weight of artillery and trench-mortars he blasted his way through the defences of the left of the Highland Division and the right of the 6th Division. Then his troops, having poured through this gap, turned to their flanks, and, assisted by the fog, attacked each successive line of trenches in enfilade. 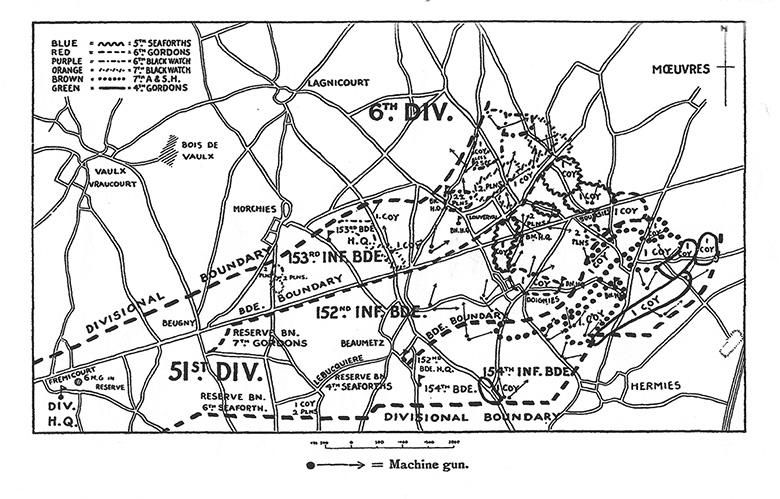 In the front and support lines the attack progressed for some distance. After putting up a stout resistance, a post of the 7th Black Watch was overwhelmed, only one survivor returning. Other posts were taken in succession until the remnants of the 7th Black Watch were rolled up amongst the 5th Seaforth Highlanders. They, in their turn, burnt by the flames of the projectors, bombed and raked by enfilade machine-gun fire, were driven in on the 6th Gordon Highlanders. The 5th Seaforth, however, fought stubbornly, two Lewis guns in the front line firing twenty and fifteen drums respectively into the German masses.

In other parts of the front, however, great changes had taken place. Almost simultaneously with the capture of the front line, the whole left flank as far as the intermediate line was assailed by vast numbers of the enemy.

In rear of the support line some of the 7th Black Watch, two sections of the 400th Field Company, R.E., and some machine-guns were in turn overwhelmed in the mist. One machine-gun in the encounter alone fired over 10,000 rounds before its section was put out of action., only two survivors returning.

Editor. The above can only serve to give a flavor of the initial hours of the German attack on the Division. The full account in The History of the Fifty First (Highland) Division 1914-1918 by Major F.W. Bewsher D.S.O., M.C. describes the subsequent four days. Over this period as the British line fell back the Division continued to fight with many acts of astonishing gallantry against overwhelming odds.

Bewsher records that after five days:

The remnant of the Division was thus left still facing the enemy, its three brigade headquarters just in rear of the fighting line still in the same order of battle in which they had begun the engagement, but their fighting efficiency was gone. With no British troops on their right nearer than Albert, there was no other alternative left but to break off the engagement and withdraw. Accordingly orders were issued for the Division to concentrate at Colincamps, where Divisional headquarters had opened at 4.35 P.M. 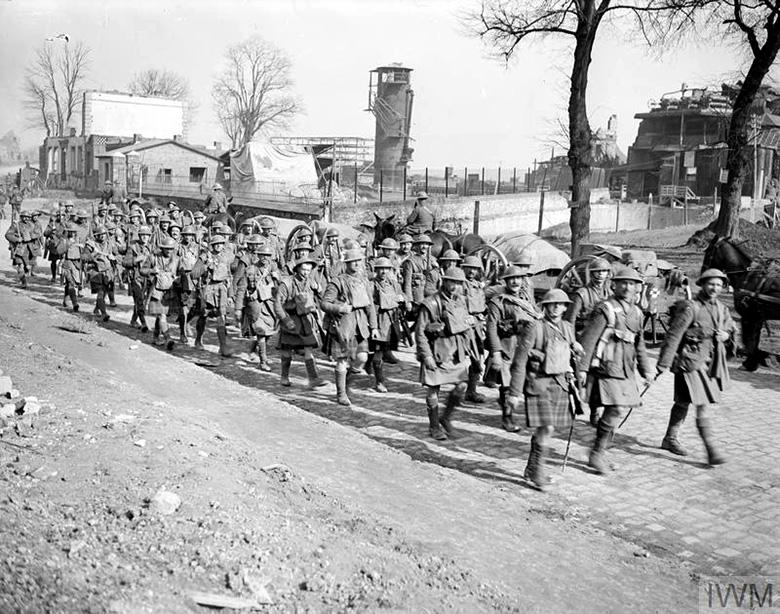 Battle of St. Quentin. No.8 Platoon, B Coy of the 7th Argyll and Sutherland Highlanders retiring along the Cambrai road near Beaumetz. Limbers of the 25th Division passing in the back ground. By kind permission of the IWM.

The withdrawal of all that, was left of the Highland Division along the road from Puisieux to Colin camps was a melancholy spectacle: a long line of men and horses, tired and exhausted almost beyond the limits of human endurance, dragging themselves along, many with undressed wounds. The men fell back in groups, not as formed bodies, but not as in a disorderly rout. Every man retained his arms and equipment, and in spirit would have taken up any line ordered and continued the struggle; but in their acute stage of exhaustion further effective resistance was out of the question, and so was not asked of them.

The total casualties sustained by the Division in this action were 219 officers and 4696 other ranks. Of these, the infantry losses amounted to 157 officers and 3744 men. Assuming that the nine battalions of infantry each went into action 600 strong, excluding transport drivers, &c., it will be seen that out of a total of 5400 officers and men only 1500 survived. These figures in themselves show the nature of the fighting. The casualties in officers were also, as is always the case, heavy. Of the 10 commanding officers of the infantry and pioneer battalions, 3 were killed and 3 wounded.

In the first three days alone eight separate German Divisions operated on the Divisional front-the 3rd Guards, the 4th and 5th Bavarians, the 17th, 24th Reserves, the 39th, the 119th, and the 195th. Certainly one other, a Jaeger Division, was engaged on the fourth day, and almost certainly others that were not identified.

Concluding on a lighter note:

The Germans, possibly the 3rd Guards Division, whom the Highland Division had twice before heavily defeated in the Ypres and Cambrai battles, showed their appreciation of the stubborn resistance offered by the Jocks by floating over to our lines a white paper balloon, on which was written, "Good old 51st, still sticking it out." A Jaeger officer captured near Grévillers, on being asked if they had suffered heavy losses, replied, "We have not yet captured sufficient ground to make us a cemetery for our dead."