Below is an extract from the War Diary of Capt. J.P.P. Taylor, who was the Intelligence Officer of the 1st Battalion, Gordon Highlands.

Thanks to Hutchy, who always found the largest and most luxurious houses for Bn HQ, we found ourselves in a really beautiful château which had been evacuated, but all furniture, fittings etc. remained. The Colonel went straight to bed on arrival but Hector and myself thoughtlessly took his remaining two bottles of beer out of the car and drank them over a cigarette in the dining room before turning in! We never realised that these were irreplaceable and had been carried all the way from Varennes!

Everyone slept until 1030, when we came down and enjoyed an excellent breakfast cooked by Ord, who made the most of the château kitchen and the produce from the home farm. Shortly afterwards the Brigadier arrived, also the CRA (Commander Royal Artillery) and the Machine Gun Company Commanders, and the Colonel spent from 1100 to 1400 hrs in conference, preparing and co-ordinating the plan of attack for the following day. Brian and the Padre came to lunch. The weather was extremely fine and very hot and we all enjoyed a restful few hours.

At 1600 hrs verbal orders were issued for the attack to all concerned, round the dining room table, and by 1700 hrs Company Commanders set off to make their own arrangements. Little further ground reconnaissance only was necessary, as we had been twenty-four hours in the area. At 2000 hrs we sat down to dinner and broke a few bottles of rather indifferent champagne, wishing all concerned success. Douglas Gordon as far as I can remember was the only guest. At 2300 hrs Hector and I succeeded in getting written orders sent out. There was, as can be seen, a considerable delay over this, but the ‘duplicates’ had been sent back to the wagon lines together with the office truck, and these took some time to procure. On all previous occasions there had never been time for long written adieus, and the ORS (Orderly Room Sergeant) Sgt Waterman had got into the habit of relying entirely on a typewriter and carbon copies, which would have meant an enormous amount of duplicate typing to cope with a distribution list of 32 copies approx.

From 2300-0130 hrs a compulsory rest was ordered. I didn’t really sleep but felt quite refreshed when Pte Lawrie came to wake me with a cup of tea at 0130 hrs on June 4th. Douglas Gordon stayed with us until 2300 hrs. He seemed rather depressed, we thought, although outwardly he was still his old self, talking about our days in Lille and the poker parties at Steenwerck. I received three letters from my mother during the afternoon; the next time I heard from her was on October 1st at Laufen. The date of her latest letter was May 28th and contained news of the BEF fighting and the collapse of Holland and Belgium. 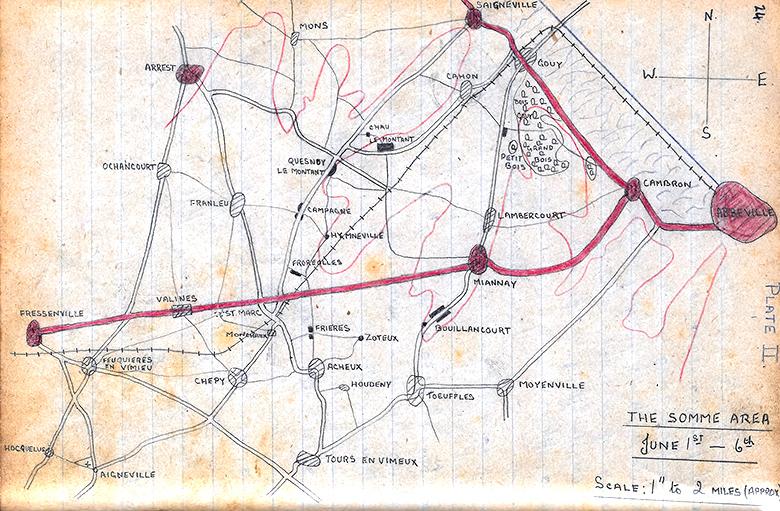 On the morning of June 4th the battalion took part in a Divisional attack, the general intention being to straighten out the present line and hold the line of the Somme itself from Abbeville to the sea.

The battalion attack was planned to take place in two phases:

Phase i: The capture and consolidation of the Grand Bois.
Phase ii: To push forward on to the line of the Somme itself, the east edge of the Bois de Cambron being the actual objective.

For this attack two platoons of the Kensingtons under Major de Chiang and one pl. of 7th Northumberland Fusiliers (2/Lt. Elliot) were attached to the battalion to give the necessary Machine Gun support. The Divisional Artillery programme allotted us one Bty (4.5 hours) of the 75th Fd Regt (Field Regiment) for artillery support.

The original idea for the execution of these two phases was as follows. ‘B’ and ‘C’ Companies were to attack the Grand Bois. ‘B’ Company was to advance round the northern, and ‘C’ Company round the southern, outskirts of the wood, and both Companies were to fan inwards as soon as the density of the wood permitted. On reaching the far end of the objective, i.e. the north-east edge of the wood, which joined the main Cambron-Gouy road, ‘B’ Company was to form a flank guard to the left or north flank of the battalion. This meant distributing the Company along the northern edge of the wood itself. 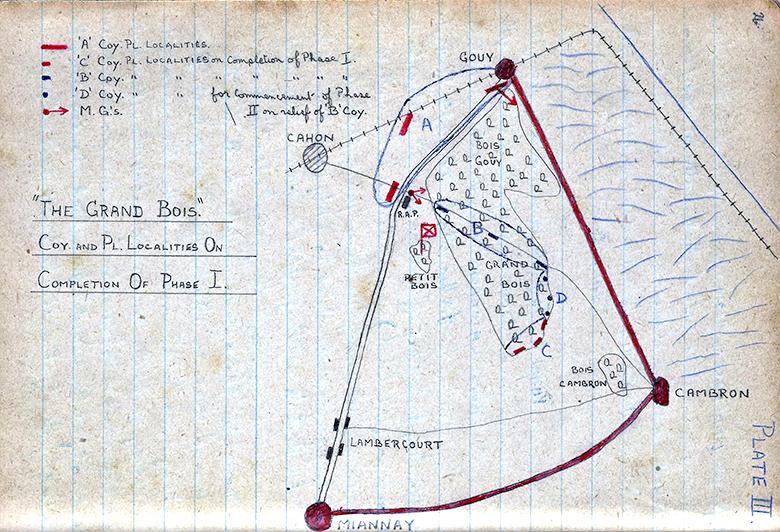 Sketch map by Capt. Taylor, Intelligence Office 1 Gordons, detailing Coy and Pl. localities on completion of phase i (the capture and consolidation of the Grand Bois). June 4th 1940

Machine Guns were disposed as under.

1 Pl. under Comd (command - meaning they are under command of A Company in this case) ‘A’ Coy
1 Pl. and 1 Section for support in the Grand Bois and Bois Cambron attacks
1 Section for the protection of our right flank.

The Art’y were responsible for putting down a barrage on the Grand Bois from (Z-10) to (Z+10) and then to be used as necessary prior to the execution of Phase II.

Bn HQ were moving from the high ground east of Lambercourt to the Petit Bois as soon as the latter had been reported clear of the enemy. The clearance of this wood was undertaken by two platoons of 1st Black Watch who were to enter the wood at (Z-15) and to report to the Bn Comd on completion of this task.

The RAP (Regimental Aid Post) was established in the farm buildings in No. 16 Pl. area. Zero Hour was timed for 0330 hrs. The French were due to attack on our extreme right and were to be assisted by Tanks. Aircraft were going to bomb the Somme bridges and Abbeville. The 7th A&SH were remaining in their present position at Saigneville on our immediate left.

To start with, everything went according to plan. The weather was ideal; there was a thick ground mist. The Colonel, Hector and myself left Quesnoy shortly after 0200 hrs and motored to Lambercourt, where we left the car and climbed up on to the high ground to the east of this village, where the MG Coy Comd Major Chiang and the Art’y LO, Capt. Bitin, an extremely helpful and efficient officer, joined us. Sgt Littlejohn arrived with HQ Coy under comd of Hutchy shortly afterwards. The remainder of HQ Coy stayed at Lambercourt until we moved forward.

At 0315 hrs the two platoons of IBW (1st Battalion, Black Watch) went into the Petit Bois, which they found clear of enemy. At 0320 hrs the artillery bombardment came down and at 0330 hrs ‘B’ and ‘C’ Companies crossed the starting line, which was the Lambercourt-Gouy road. ‘C’ Company made good progress in spite of encountering fairly heavy opposition from enemy MG posts, and finally reached its objective at 1030 hrs approx. The method of signalling the progress of advance by firing white Very lights along the edge of the wood was used and worked admirably. 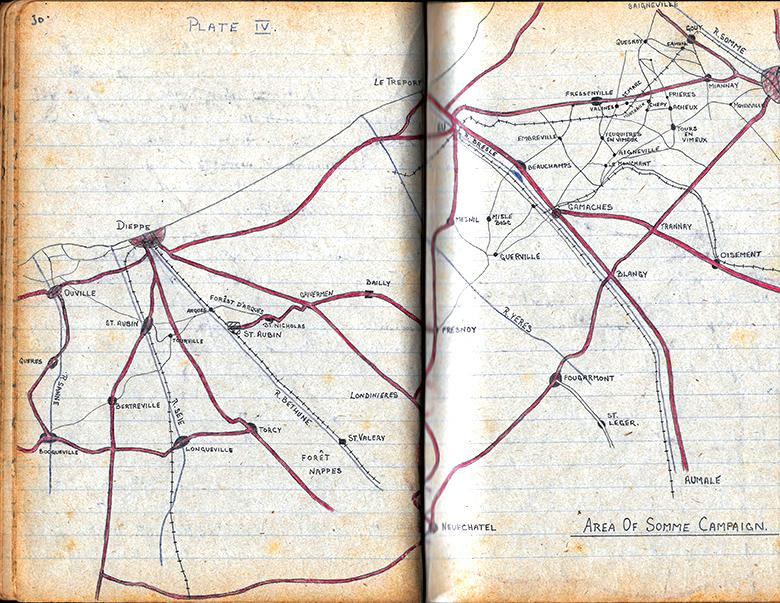 ‘B’ Company were held up at about 0340 hrs by a strong and well-sited MG post situated in the southwest edge of the Bois Gouy. Only two sections of Sgt Xxxxx’s Pl. and one of Capt. Sword’s Pl. got through. Both these Companies actually reached their respective objectives at 0500 hrs approx., but it wasn’t until the times stated that the positions were consolidated. This was due to the intense thickness of the wood, which caused loss of direction. They opened fire on Coy HQ causing many casualties. Major D.W. Gordon was killed and C.S.M. Keane seriously wounded. This news was received at Bn HQ shortly afterwards and Capt. J.C. Dennistoun Sword was ordered to take over command of the company, and a message was sent to ‘D’ Company ordering a platoon from that company to capture this post which was holding up the whole advance. This task was given to 2/Lt. J.W. Rhodes and 16 Pl., who did extremely well and made it possible for the main advance to continue. ‘B’ Company finally reached its objective at 1100 hrs approx. ‘D’ Coy then moved forward and at 1200 hrs the Colonel phoned to Bde HG that Phase I was completed and that we were ready to commence Phase II. We were told to remain fast at the moment as attacks on other parts of the front had only been partially successful.

There was little further activity during the day and at 1830 hrs we received a message ordering us to withdraw, as the general offensive had failed and therefore our present position formed a rather dangerous salient. The withdrawal commenced at 1900 hrs, ‘A’ Company remaining in position at Gouy; ‘B’ Coy returned to Cahon, ‘D’ Coy to Lambercourt, Bn HQ and ‘C’ Coy in reserve to Quesnoy-le-Montant.

The withdrawal of Bn HQ was delayed owing to the presence of enemy aircraft and le-Montant was not reached until 2100 hrs approx.

During the day’s operations the battalion suffered 13 killed and about 30 other casualties. Unfortunately it was not possible to bury the dead of either side owing to the large German offensive the following morning, but all their bodies were brought back to the RAP during that evening.

In summing up, one can say that the Bn did extremely well. The operation was not an easy one as we were led to believe. The greatest difficulty was the loss of direction caused by the intense thickness of the wood, which gave one the impression of very heavy casualties at first until lost individuals and sections rejoined. ‘A’ Company took four prisoners who were caught entering Gouy and at a moderate estimate I should say that we killed between 25-35 enemy in Grand Bois itself. I will try and compile a list of our own casualties but it will be by no means complete as DC ‘B’ and ‘C’ Coys are not at present here.

Our withdrawal was very quickly followed up, and before we left Lambercourt for le-Montant the high ground west of Lambercourt was under rifle fire. We arrived at le-Montant rather weary, at about 2100 hrs, to find that Hutchy had again found a lovely château for Bn HQ, and, after checking everyone in, we ate an excellent supper of eggs and bacon (not enjoyed by Hutchy as he couldn’t get fried bread!) and, after reading our letters from home, which were the very last we were to receive, we settled down for the night at 2330 hrs approx. Cummings had been excellent in providing clean sheets, hot water etc. and I admired the speed at which he used to pack and unpack. I remember receiving a book from my grandfather, which he had carefully cut into small sections in order to send through the post. My only regrets are that I never had time to read it and that it still remains there.

Capt. J.P.P. Taylor's War Diary extracts continue with a description of the 1 Gordons' withdrawal from the Somme, 5th/6th June 1940

The 51st Highland Division landed in Le Havre in January 1940 as part of the British Expeditionary Force [B.E.F.] On 28th March they were deployed into the defensive line relieving the French 21st Division between Bailleul and Armentiéres...

An extract from the War Diary of Capt. J.P.P. Taylor, the Intelligence Officer of the 1st Battalion, Gordon Highlands, covering the first week of June 1940.