9th Royal Scots were part of 154th Brigade and were the Division’s reserve brigade for the attack on Beaumont Hamel. The following is taken from the diary of Private A F MACPHERSON, 9th Royal Scots. 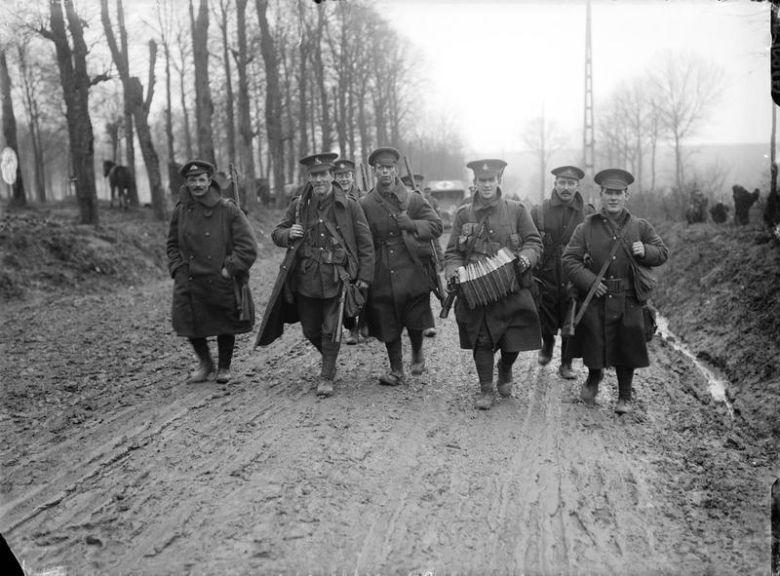 Next night we were relieved by the 152nd Brigade who came up in battle order in greatcoat with haversack on back instead of the pack. The 152nd and 153rd Brigades were to attack. We were to be in reserve as we had borne the brunt at High Wood in July. Luckily our friends the Gordons had cleared 4th Avenue during the day and it was dry when we went down that night at top speed as the enemy were shelling the top end more than was pleasant.

As we neared the bottom we heard a faint beating noise like that of a motor standing with its engine running. On emerging from the trench we saw strange lights on the ground near Auchonvillers and on passing these found they came from chinks in the sides of the tanks whose slow advance had caused the above sound. Our curiosity could not be satisfied this time. We hastened back to Mailly Maillet huts and lay down for a hurried sleep.

The barrage was to open at five next morning, the 152nd and 153rd Brigades were to attack, and we were to stand to arms in case of support being needed. 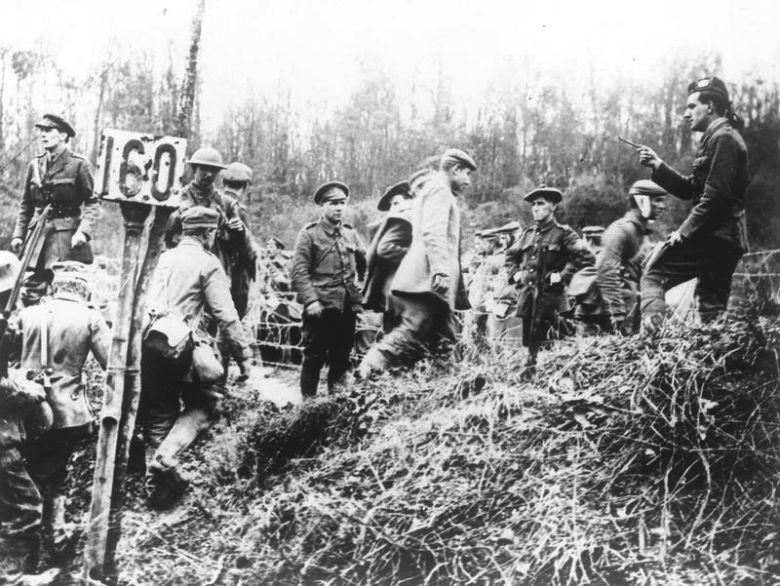 German prisoners counted in from Beaumont Hamel, captured by the 51st (Highland) Division on 13th November 1916.

We woke before the time and waited for the bombardment. It came all of a sudden like the long roll of drums, the individual sound of the explosions being merged in one long continuous rumble; appalling to hear. One moment all had been quiet - the next everything was dominated by the crashing rumble of the guns. It was hard to believe that human beings could live through such a whirlwind of fire. As the long thunder of the guns kept up we waited anxiously for news of the attack. Soon the appearance of long columns of prisoners, marching in columns of fours through Mailly Maillet and past the wood, showed the success of our comrades. Soon the news of the capture of the famous stronghold of Beaumont Hamel came though. Our attack had been a complete success though the Division on our left had failed.

In the afternoon we were ordered up as supports. Several out of each gun team were left down as reserves and the rest of us, equipped for battle with greatcoat and haversack on the back of the equipment instead or the pack, pulled our gun barrows out of the wood and marched off through Mailly Maillet for the scene of the action. As we marched through the village German shells whined overhead bound for some destination behind us. We emerged on the open country; to the right of Auchonvillers, dotted over thickly with batteries in action and with groups of German prisoners emerging from the communication trenches and, accompanied by guards, being led to the rear. Some of them looked overjoyed at their capture, one man cheerfully shouted "Guerre fini pour moi" (the war over for me) as he passed but others looked dazed and frightened. Most wore the new steel helmet, a large affair like a pot with two small hornlike projections, or else the round flat forage cap. Here and there we could see groups halted while guards took over prisoners’ watches, etc. as "souvenirs”.

We left our barrows together in the open and laden with our ammunition followed the rest of the battalion along the railway line near Auchonvillers. We could see the tanks still not far in front of the village slowly pushing forward over trenches and earthworks like snails.

Night was now coming on and we were halted outside the communication trenches to await further orders.

Here there were numerous old trenches and new shell holes and into these the whole battalion went for cover as now and again a salvo of German shells would whizz over at the batteries which were firing incessantly. In between the roar of the guns there were audible the orders of the battery Commander shouted through a megaphone from his shelter to the gunners; the answering shouts of "Number so and so ready to fire", and the order "fire"; followed by the discharge of' the whole battery, bang! bang! bang! bang! etc. almost simultaneously. When it is realised that dozens of batteries were performing this at the same time all along this front from Serre in the North to Thiepval in the South, the volume of sound can be imagined. Night fell and we were still huddled in the old trenches. It was cold and so one of our team gathered some sticks and, in spite of the protests of the N.C.Os, lit a fire. However its cheery blaze had not been on long when there came orders to put it out at once, which was only to be expected. Soon after we got orders to advance and filed up Tipperary Avenue, the communication trench in this sector which was further to the right than White City where we usually went. 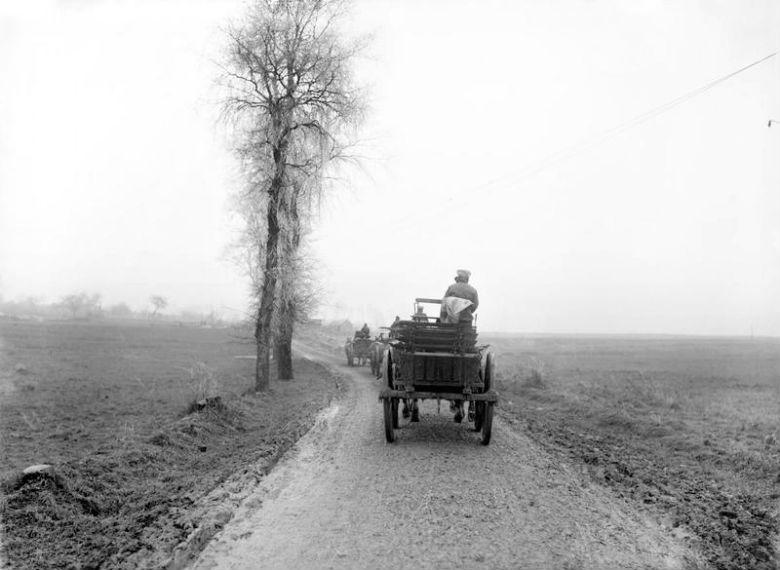 Photograph of transport along the Auchonvillers to Beaumont Hamel road, November 1916.

As the entire battalion was filing up the trench progress was slow, but luckily the enemy were not shelling the place and the only signs of action were places where tanks had crossed and knocked down the sides in so doing. We crossed the Auchonvillers road, plunged into the trench again and finally reached the support trenches there called St. John's Road. Here we halted but as we had lost touch with our officer we Lewis Gunners did not know where to go. The whole battalion was strung out along St John's Road and to make matters worse the enemy opened a bombardment with heavy shells. These projectiles came roaring across, struck the trench and burst with nerve shattering explosion and a huge cloud of black smoke and earth, sending jagged lumps of metal casing flying all round. Heavy casualties began to be reported - one gun team of "A" Company was wiped out by a shell, all being either killed or wounded. We began to move back down the trench till we were once more in Tipperary Avenue. This trench was deep and narrow and seemed safer but Fritz seemed to have a large gun firing on it. We sat crouched in the bottom waiting for his next shell. The roar of its approach could be heard in the distance, then like an express train it would rush overhead, meet the ground with an earth shaking thud and burst with a deafening roar sometimes throwing earth and debris into the trench.

At intervals of a few minutes these projectiles would be fired and every time we expected one would land right amongst us. Luckily none did at our part of the trench but casualties came streaming down from St. John's Road. Hurried questions and answers passed between the wounded and friends in the trench - "Is so and so all right?" "Yes". "How is number such and such platoon getting on?" "Jock, Sandy and Bill killed", and so on. Evidently the Companies in the "Road" were hard hit.

After sitting for some time in the communication trench, inwardly cursing all in authority for the delay, word was passed up to move down towards the mouth of the trench. With great celerity everyone carried out this order though most of us doubted its authenticity and began to think it was originated by the men in a panic. However we were all too glad to get to some safer place so started at once to follow the two companies behind us down towards Auchonvillers.

Now in these trenches there are posted men as police to stop anyone coming away from the line without reason, i.e. wounds or messages and one of these halted us and coming along the parapet asked who had authorised the retirement. No one knew but at last after some delay an officer appeared. Various rumours were afloat. One that we were going back to Auchonvillers; another that these two companies were for White City. Orders were passed up and down and great confusion prevailed. "Pass the word up if there are any of 10 platoon in rear". "Is "B" Company in front?" and so on. At last the order was given for the two companies to turn about and advance again. However as we were not really attached to them we decided to stay where we were and remain for orders.

We therefore squatted down on the duckboards in the bottom of the trench and prepared to pass the night in the open. Our resting place was none too soft; the night was cold but there was not much of it to pass and the dawn soon came to find us crouching cramped and cold on the boards. Our first object was now to get fires going and make tea. A few of the cross-pieces of the duckboards, pared down and placed in a crevice in the parapet produced enough heat to boil tea and heat up some tins of kippers which had been issued to us before we left the wood to serve as an extra ration. We made quite a satisfactory breakfast of these eatables and then prepared for a move. By this time the attacking Brigades were being relieved and numbers of Black Watch carrying German bayonets, helmets, caps, belts and other souvenirs came down the trench en route for Mailly Maillet.

Orders Came for us to advance to Brooke Street in our old front line and take up our quarters in dugouts there. Luckily the shelling had died down though we could see its results by frequent miniature landslides of the parapet into the trench. St. John's Road along which we had to pass was particularly damaged and in the bottom or the trench was a ghastly reminder of the night before, i.e. what remained of a body of a man lying half buried on the duck- board. As we stepped over it our first thought was that above it on the parapet lay a German stretcher bearer with his stretcher evidently killed while assisting in taking back our wounded. We hurriedly pressed on past these gruesome sights and, guided by our officer's runner, reached the old front line which showed little signs of bombardment but was in a bad state of mud and water.

The dugout which we were to occupy was small with deep stairway and we soon found several drawbacks. Firstly the dugout itself leaked like a spray bath and was in a filthy unsanitary condition. Only about half a dozen could be in it and had to cover themselves with their waterproof sheets to remain dry. The rest squatted on the stairs where they were so cramped that sleep was almost impossible. It was a question of being dry but cold and cramped on the stair, or wet but comparatively warm and stretched out below.

Personal account from the Diary of Pte. MacPherson, 9th Royal Scots, of 154 Brigade during the attack on Beaumont Hamel between the 12th - 14th November 1916