This short extract on the attack on High wood is taken from "The Fifty First in France" by Captain Robert R Ross, Gordon Highlanders, published in 1918 and republished by The Naval & Military Press Ltd.

On the 28th [July 1916], the 153rd Brigade relieved the 154th Brigade in the line. It was known that an attack on High Wood was impending. The favourable opportunity was awaited with ill-concealed impatience. The exploitation of a successful push demands the most exacting preparation, the essential requirement being a precise co-operation between infantry and artillery; otherwise our brave battalions become, to use an expressive German phrase, "Kanonenfutter." Very detailed information, secured by the resourcefulness of patrols, the intelligent interrogation of prisoners, and the daring reconnaissances of aeroplanes, are the only means whereby suitability of target can be guaranteed to the guns. Events proved that in the subsequent assaults on High Wood too little was known regarding its state of defence. For however intense the shelling, it was not yet intense enough to break down the resistance of the defending garrison. Although it was now common knowledge that the 51st Division would launch an offensive in conjunction with the 19th Division on the left and the 5th Division on the right, the actual zero-time was not positively fixed; or, if it was, secrecy was well maintained. It was stated that fifty deserters to the 5th Division reported preparations for a German counter-attack on their lost positions before Longueval. This attack materialised, but failed to achieve success. 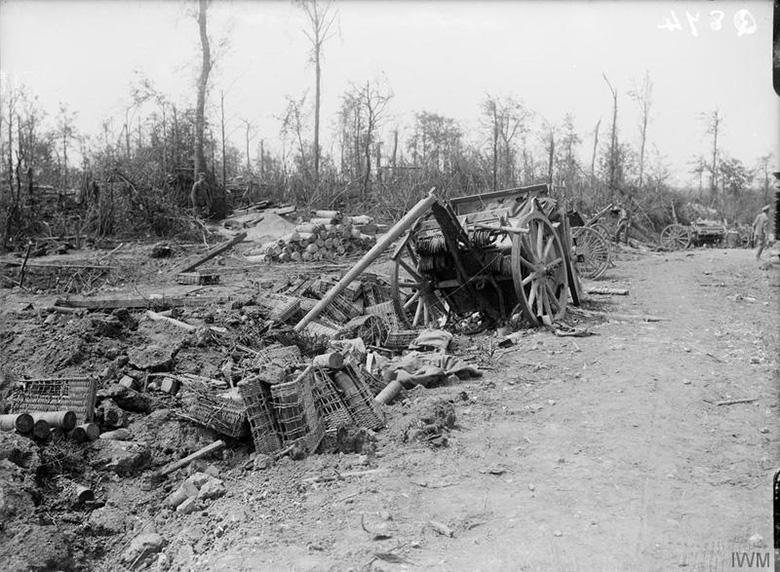 On the 29th more and more fire was concentrated on the enemy. Tons of metal were hurled into High Wood and the hurriedly designed switch-line running from it to Flers. Its trees were uprooted and its timbers twisted and split and slivered. But a wood must be utterly devastated if an attack upon it is to make any progress. Merely swept down, it becomes a man-trap. Here the Germans, wonderfully tenacious of ground, wired the fallen branches, made obstacles of tree trunks, and established well posted machine guns in the corner of the wood. It was such a formidable objective that faced the brigade on the 30th, when the final orders were issued. During the afternoon an intensive bombardment prepared the way for the assaulting units. At times it increased to a drum-fire. The preliminary bombardment began at 4.45 and continued till 6.15. The brigade took up position as follows: The 7th Black Watch were opposite High Wood. On their right extended the 6th Black Watch Still farther to the right lay the 5th Gordons. The 7th Gordons were in support near the Crucifix. At Mametz Wood the 152nd Brigade lay in readiness for any emergency as divisional supports. The 154th Brigade were withheld as divisional reserve at Bécordel. The 19th Division, it will be remembered, were co-operating on our left and the 5th Division on our right.

The hour of zero was 6.15. At that moment the guns lifted, and the assaulting waves leapt over the parapet. They were instantly met by a well-sustained fire from trenches that seemed to be amply manned and plentifully munitioned. From the very beginning the attack was doomed to frustration. By those awful sheets of cross-fire men were mown down in swathes. The 7th Black Watch, embarrassed by the treacherous pitfalls and blocked by a thick réseau of barbed wire, were shot down in great numbers. By 7.30 p.m. the situation was dangerous. Everywhere the assault had broken down. A précis of the reports received an hour after the initiation of the attack established the fact that the 7th Black Watch had sustained severe losses. Among the officers Captains Boase and Gillespie were known to be dead. To balance this loss a slight forward thrust had been made, but the enemy's trenches were nowhere penetrated. Digging operations had to be resorted to. The other two battalions, similarly affected and with proportionate losses, were forced to earth. They could neither advance nor withdraw, and their casualties were mounting up at an alarming rate. Urgent appeals were therefore made to the 7th Gordons for assistance. Platoon by platoon these reinforced the firing line till all but three were absorbed. They had to pass through terrific bursts of curtain fire, but by a singular good fortune escaped without heavy losses. At 9.45 the attack on the left was resumed, and both artilleries blazed into a new accès of fury. The divisions on either flank had achieved moderate successes. All night long the enemy poured destructive fire on our positions.

It was deemed advisable that the 7th Black Watch should be replaced by the 7th Gordons. Instructions, therefore, were issued to that effect, and the relief was completed by 4 p.m. on the 31st without incident. A clear review of the situation now shed interesting light on the murderous fighting that marked this disputed wood as one of the grimmest charnel houses on the Somme. The wood became each day a more and more sombre morgue. All living things within it seemed to be fated to extinction. Yet at no time could the shelling of our trenches be characterised as severe. The enemy was conspicuously nervous. He opened barrages for no apparent reason, and flung away an incalculable amount of ammunition which spent itself to no advantage in the hollow ground behind High Wood. On our left the advanced trenches of the enemy were clearly within view. On our right the flaming embers of Longueval were spurting high in horrid red spears. In all this upheaved area the earth was spouting in huge black cataracts, and the air was charged with dense clouds of smoke. In some places cones of fire rained down from heaven and great white banks of cumulus rose up and slowly dissipated.

The switch-line of the enemy and his lateral retrenchments for converging fire were admirably sited to frustrate any further offensive. Until the preparation, therefore, could be made overwhelming, no offensive was planned for the immediate future. Nor did it seem, after the lapse of a few days, that the Germans would initiate a counter-blow. Inaction, however, can never be laid to their charge. Each day saw their defences, so seriously threatened, grow more formidable. Their pioneers were tireless. Their "Beton-truppen," specialists in the erection of concrete machine-gun emplacements, and their "Hollenbaukommandos" for the construction of dug-outs, were organising a newly formed system of trenches on a scale of great magnitude, and with the invaluable accessories of intermediate strong points. Trenches, wired and traversed, emerged in a single night. The favourable features of the ground were everywhere transformed into miniature fortresses of amazing strength, from whose loop-holed bastions machineguns in countless numbers pushed their deadly muzzles.

The brigade, exhausted by their toils, stifled by the heat and dust, and almost unmanned by the shambles around them, on the first day of August went into bivouac at Buire as divisional reserve. The 152nd Brigade relieved us, my unit handing over to the 6th Gordons.

During the Battle of the Somme, High wood had been taken by 7th Dragoon Guards and Deccan Horse but part had subsequently been retaken by the Germans. The division was ordered into the line on 21 July that evening. With less than twenty four hours to prepare, on 22 July 1916 the Division was ordered to attack High Wood...

Description of the 2nd attack on High wood on 30th July 1916. Extract from "The Fifty First in France" by Capt. RR Ross, Gordon Highlanders, published in 1918.