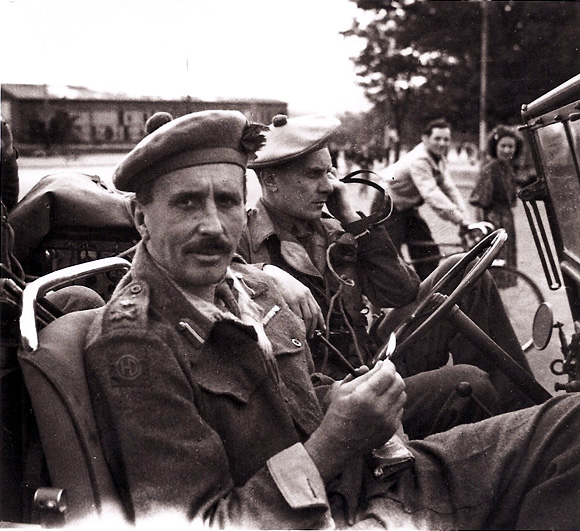 MAJOR GENERAL T. G. RENNIE has been killed in action in Germany and the 51st Highland Division has lost an outstanding commander and the British Army has lost a great soldier. General Rennie's military career was an outstanding record of positive achievement - he escaped from the Germans after being captured with the original 51st Division at St. Valery, he commanded a battalion of his own regiment (The Black Watch) with great distinction in the battle of Alamein, he commanded an assault Brigade (154 Infantry Brigade) in the landings in Sicily, he commanded one of the two British assault Divisions in the landings in Normandy and, having been wounded a few days after D Day, he took over the 51st Highland Division before the break-out from the Caen bridgehead and commanded that Division right through France, Belgium and Holland, into Germany and across the Rhine. He was killed shortly after he himself had crossed the Rhine and had satisfied himself that the assault crossing by his Division had been successfully accomplished and that the operation was being developed in accordance with his plans.

The proper assessment of General Rennie's military career and accomplishments is, however, quite outwith the scope of this Appreciation which is intended to pay tribute to his qualities as a commander and leader as revealed to those who had the good fortune to serve under him, but it may perhaps not be considered presumptuous, even from this level, to say that such a record of important and difficult tasks successfully accomplished can seldom have been equalled by a soldier of General Rennie's age and seniority, and could never have been achieved had it not been for the outstanding qualities with which he was imbued and which were immediately apparent to all who served under him and who will never forget his tremendous determination and unshakable tenacity of purpose together with the ability never to .allow himself to become harassed or weighed down by difficulties. He had a great flair for doing things the right way and, equally important, complete confidence in his ability to do so and in his own judgment. He knew at once what was essential and refused utterly to bother himself at all or take the slightest interest in anything which was not. He had great personal courage and was blessed with an optimistic outlook with which he was able to infect all who served under him. He could be completely ruthless when he considered it necessary to be so, but he always retained a great sense of humour and he realised to the full how vital cheerfulness is in war. He had a spontaneous-almost schoolboyish, in fact-sense of fun which manifested itself so often just at the right moment, he was the least pretentious and unassuming of Generals, and he was so approachable that everyone, however junior, felt completely at ease with him. The knowledge and experience -which he had gained first hand, both as a Battalion Commander in battle in this war and later as a Brigadier, stood him in great stead as a Divisional Commander and, coupled with his own outstanding ability and strength character, enabled him to enjoy the complete confidence and implicit trust of everyone who served under him.

In spite of all his outstanding qualities, General Rennie was not, and certainly never pretended to be, in any way perfect. He had his faults like everyone else and no Appreciation could be really sincere which pretended otherwise. He could be intensely vague - sometimes, admittedly, intentionally and at times complete understanding of what he really wanted done became almost an acquired art requiring an intimate knowledge of his own particular ways of working and thinking. His determination of mind and purpose sometimes appeared to cause him to be rather too inflexible with the result that at times he was inclined to allow his first impressions to continue to influence him too long and after they had, sometimes even on his own admission, ceased to be applicable.

Sometimes as a hobby and as a diversion to military problems he painted, and even the results achieved would never convince him that his talents did not lie in this direction. The fact that his efforts to portray horses grazing in the Seine valley were not successful was, it was made quite apparent to everyone, more due to some fault on the part of the horses themselves or the Seine valley rather than the painter himself. These various idiosyncrasies only tended, however, to show that, notwithstanding all his brilliant qualities as a soldier, he was intensely human, and all who had the privilege of serving under him will long retain the happiest and most grateful memories of an outstanding commander and an inspiring leader.