By the 28th June the Division had concentrated in the area of SOUSSE. The move was carried out partially in the landing craft which were available at DJIDJELLI and by MT. The sea move, which was carried out largely by LCIs, provided useful experience to men in acquiring their sea legs. From the concentration areas troops and vehicles were called into assembly prior to embarkation. In these areas troops and vehicles were checked up, and in the case of vehicles the adequacy of the waterproofing was examined. Al the vehicles loaded in the convoy landing on D.1 had to be waterproofed to enable them to debark from landing craft through several fee of water. All the arrangements for the embarkation of troops through the transit areas worked smoothly. The loading of the Divisions' vehicles and stores took approximately six days.

The landing craft used for the operation consisted of Landing Craft Assault (LCA), with a capacity of one platoon, Landing Craft Motor (LCM) with a capacity of 2-3 vehicles according to type, Landing Craft Infantry (LCI) with a capacity of 200 men with manhandling loads, Landing Craft Tank (LCT) with a capacity of 8 tanks or 12 vehicles, Landing Ship Tank (LST) with a capacity of 60 vehicles, Landing Ship Infantry (LSI) with a capacity for 150 troops. The LSIs carried smaller landing craft such as the LCAs and LCMs swung on davits together with the personnel and vehicles naval plan for the movement for the assault convoys was as follows. The LCIs and LCTs were to move two or three days in advance and were to stage at MALTA where personnel were to be rested prior to the move to Sicily. The larger vessels, LSIs and LSTs were to move direct from SFAX to Sicily. All convoys were scheduled to rendezvous at a point North-East of Malta and assemble at a release position approximately 7 miles South of CAPO PASSERO by 2300 hours. At the release position LCAs were to be manned and lowered, after which the 1 Gordons and 154 Brigade convoys were to move to their respective Red and Green waiting are positions which were a mile off-shore. From the waiting positions LCAs were timed to beach at zero, 0245 hours, following half an hour later by LCIs and LCTs carrying the reserve companies and Battalion Headquarters of the landing Battalions. At approximately Zero plus one hour the LCIs and LCTs of 154 Brigade reserve were to be in the vicinity of the beaches ready to beach when the opportunity offered. All craft were to be beached by daylight or be in an unsinkable position by that time. To enable loading to be carried out after daylight arrangements were made for a large quantity of smoke canisters to be carried in all craft, so that the area of the landing beaches could be adequately smoked should this be necessary.

Naval support for the approach to the beaches consisted of Landing Craft Guns whose primary task was to take on searchlights, Landing Craft Support whose task was to cove craft during their approach to the beaches, and Landing Craft Rocket whose task was a, to provide a block barrage on the beaches on which landing was to be carried out and b, to neutralise defences on the promontories on the flanks of the landing. A Naval bombarding force of destroyers was available for the task of neutralising coast defences which proved troublesome, and Forward Observation Officers to control this navel bombardment were landed both with 1 Gordon and 154 Brigade Groups.

Zero day was to be the 10th July. The Naval plan as recounted above worked satisfactorily with a few exceptions and no enemy interference was encountered either from sea of air. The weather however was exceptionally rough for the Mediterranean at this time of year, and the majority of troops travelling in the small craft suffered from sea-sickness. There was also some apprehension about the prospects of successfully beaching the smaller craft on the surf ridden beaches, but this was accomplished without serious difficulty. Some anxiety was caused at the waiting position, as by zero hour when assault landing craft had beached, many of the LCIs and most of the LCTs had not arrived. This was largely due to the rough sea which had considerably reduced the speed of the craft. 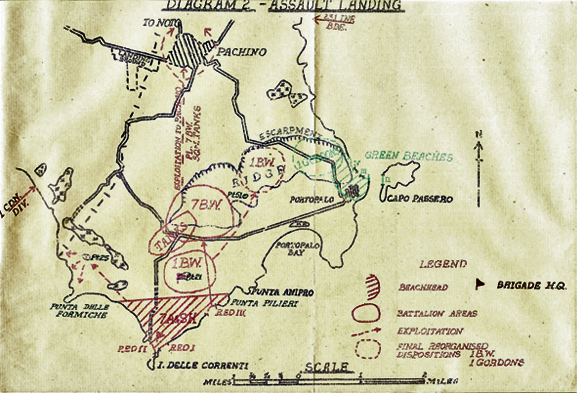 Areas of operation at the assault landing Operation Huskey.

The LCAs of the landing flight beached approximately at zero hour and in most cases at the correct beaches. The landing of the LCIs in the second flight was not however so successful as several of these vessels found difficulty in locating their correct beaches, and by arriving half an hour to one hour later delayed the movement inland of the leading battalions. Brigade Headquarters controlled operations during the initial period from LCI 177 (specifically fitted as Brigade Headquarters Ship) at the Red waiting position. The floating reserve which consisted of 1 Black Watch, tanks and 11 RHA less such detachments as were landed with the leading battalions was to land if possible at Red II beach provided the landing there was a success, otherwise the landing was to take place on Red I or Red III, or both. It was realised early during the planning stage that with the Red and Green beaches so far apart the possibility of landing the floating reserve on the Green beaches was practically out of the question.

By 0320 hours information reached Brigade Headquarters that the assault companies of 7 Black Watch and 7 A&SH had succeeded in landing without serious opposition, but that their follow up companies had not yet put in an appearance. At 0345 hours the reserve convoy including Brigade Headquarters were due to close to Red II beach, but at that time three of the LCIs of 1 Black Watch had not reached the waiting position, and it was not till 0415 that they were collected. Although information as to the progress of the initial landing was still scanty, it appeared that progress was being made on Red II beach by the 7 A&SH. The Brigade Commander decided that Brigade Headquarters and the reserve convoy should close at once in order to disembark the infantry before daylight. Disembarkation was duly carried out without enemy interference. It was fortunate that this landing was to all intents unopposed as with the concentration of craft on the beaches at daylight heavy casualties both to the craft and personnel would have been inevitable. By 0630 hours "C" company of 7 A&SH had captured Pt 25 and made contact with the 1st Canadian Division who landed on our left. At this time it was apparent that the leading battalions had reached their objectives, and the Brigade Commander recommended the landing of 153 Brigade who were planned to land on Red II and mop up PORTOPALO Bay. By 0700 hours all objectives had been secured with Brigade reserve in position according to plan.

The Brigade Commander at this stage with Commander, 11 RHA proceeded in the latter's Honey tank to the Headquarters of 7 Black Watch on the main ridge. From Colonel Oliver?s Command Post PACHINO town could be seen, and it was apparent that the Canadians on the left were making progress to the West of the town. As a result of this, the Brigade Commander ordered the 7 Black Watch to exploit to PACHINO with the squadron of tanks and one platoon of 7 Black Watch mounted on them. The force eventually reached PACHINO without meeting resistance and made contact with the Canadians on their left and 231 Brigade on their right. The Brigade Commander then proceeded along the ridge to Headquarters of 1 Gordons who had also completed their task without interference. The Brigade was finally re-organised to form a firm base, with the 1 Black Watch holding a portion of the main ridge between the 1 Gordons and 7 Black Watch, and the 7 A&SH concentrated in reserve in the beachead area.

The landing had thus gone entirely according to plan, and was not dissimilar from the training exercises which had been carried out previously; in fact the operation had gone even more smoothly than was customary on these exercises. Resistance had been negligible and only a very few casualties were suffered resulting from "S" mines, and in another case a grenade thrown into a LCA had caused a bangalore torpedo to explode. Two or three hundred rather antiquated Italian prisoners were taken, all of whom were too terrified to offer resistance. It was interesting to examine the beaches and the ground over which this operation took place after the period of intensive theoretical study of the ground from the air photographs, summaries and defence overlay maps, and satisfying to find that these had been so accurate that ones impressions as to landing facilities and the lie of the ground had proved reliable. The Brigade's task of securing a firm base on the covering positions and of rendering PORTOPALO Bay safe for the landing of the rest of the Division had therefore been accomplished