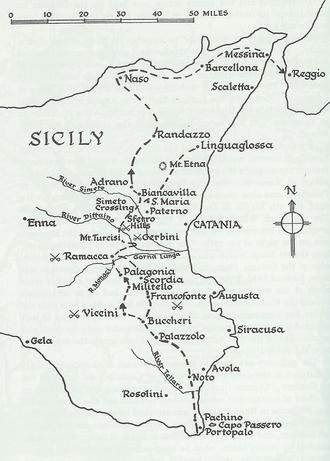 Map showing the route of the 51st Highland Division through Sicily from the landing at Portopalo to Messina during Operation Huskey, 1943.

In January 1943, Winston Churchill and the American President Franklin D. Roosevelt met with their senior military advisers at Casablanca, Morocco, to devise a military strategy for the coming year. With the North African campaign moving toward a successful conclusion, the leaders of the two nations debated where to launch their next blow. Views varied from a direct intervention in mainland Europe through to a continuation of the Mediterranean strategy to take Italy out of the war. After several days of negotiations, they agreed to make Sicily their next target.

In July 1943 the Allied forces prepared to land...