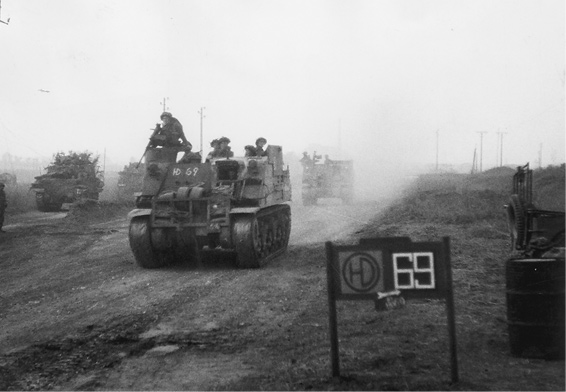 On the night of 23rd March 1945 men of the three Black Watch battalions in the 51st Highland Division were ferried across the Rhine under cover of artillery barrage and a massive smoke screen. They are seen here moving forward in 'Kangaroos'. The HD 69 signifies the 7th Battalion. Little opposition was met before they were established on the far bank. The credit for being the first British troops across the Rhine fell to this battalion. The term 'Kangaroo' was applied to converted tanks and gun platforms like the hulls of Shermans and Priests which were converted into infantry armoured personal carries from Normandy onwards.

The Tactical Numbers and colours were painted onto vehicles, signs and flags to distinguish the units and formations.

154 Brigade - Operation Plunder - The Crossing of the Rhine [ Account ]