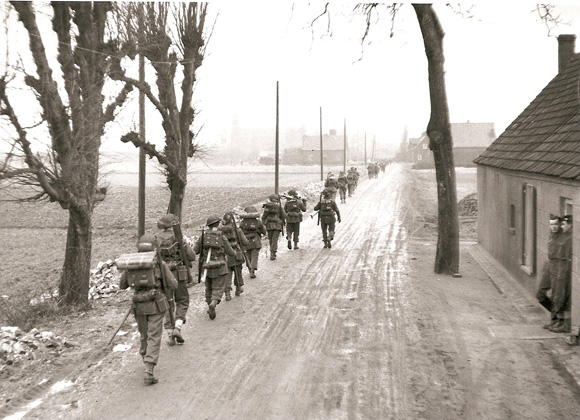 The 51st Highland Division formed part of the 1st Canadian Army offensive. The attack was faced with three lines of defence, the first a line of anti tank ditches, defended farms and villages a mile or more deep; the second was an area of open ground in the north of the Siegfried Line which itself ran south through the Reichswaldf forest to Goch; and six miles further back was a second line named by Montgomery as the Hochwald "lay-back".

The Plan for Operation Veritable [Chapter]

The plan was for 30 Corps to lead the Canadian attack, which commenced on 8th February, with 51st Highland division on the right and, because of the restricted frontage, initially with only one brigade up (154 Brigade).

The initial bombardment commenced at 0500 hrs on the 8th. The Division took the initial objective of Breedeweg with 154 Brigade leading and 152 Brigade behind. The 152 Brigade Operation Order No 12 - OP VERITABLE gives full details of their role.

153 Brigade then followed swinging south to secure the southwest corner of the Reichswald prior to cutting the Mook-Gennep road. 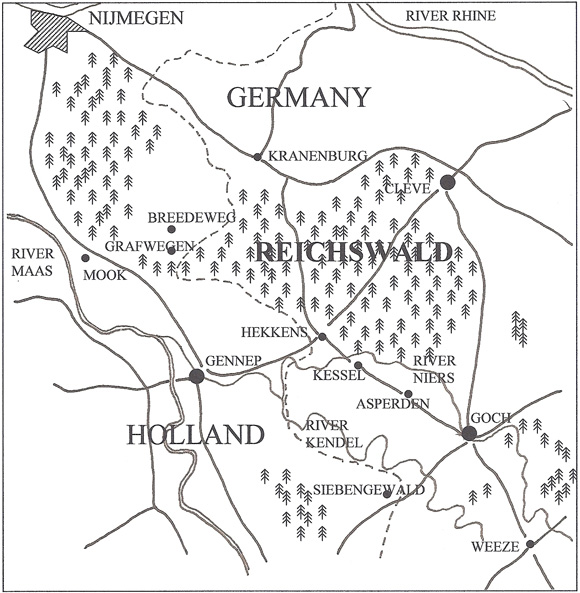 Beyond the Reichswald, between two tributaries of the River Maas the Rivers Niers and Kendel, the ground was more open but recently flooded. The division was to take the town of Kessel, a strong point on the Neirs. Before this was reached the town of Hekken on the cross roads on the Gennep/Cleve and Goch/Kranenburg roads had to be taken to provide the Corps with a secure axis. Hekken was a 152 Brigade objective but, after the Brigade had meet heavy opposition, 154 Brigade were then given the task. In a late afternoon attack in which the close coordination with the artillery was essential the town was taken. On the same day 153 brigade captured Gennep.

154 Brigade were tasked to cross the Neirs, take Kessel and establish a bridgehead. On the night of the 13/14th February the river was crossed and the bridgehead formed. The next morning fresh troops moved through to successfully take Kessel. On the 16th the village of Hassum was taken.

152 Brigade then took up the advance down the main road towards Goch clearing the triangle of villages, Grafenthal, Asper and Hervost on the way on the night of the 16th February.

The final objective was the fortified town of Goch. 153 Brigade received orders for the attack on the 18th. Crossing the anti tank ditch, which was on three sides of the town, using the AVRE bridge they caught the first of the defenders napping. However as the attack progressed the resistance increased and the street fighting continued all day and through the night into the 19th. The mopping up continued and, with the town secure, the 53rd Division passed through.

The conclusion to Operation Veritable required the Division to clear the area southwest of Goch down to the major road which would form the next Corps axis. On the night of the 25th the Kessel was bridged and 152 Brigade crossed. After some stiff resistance several enemy strong points were outflanked and surrendered and the town of Siebengewald was taken. 154 Brigade had also advanced on the left of 152 Brigade and had several actions as they cleared a number of villages. By the 27th operation Veritable was concluded and the Division relieved in place.