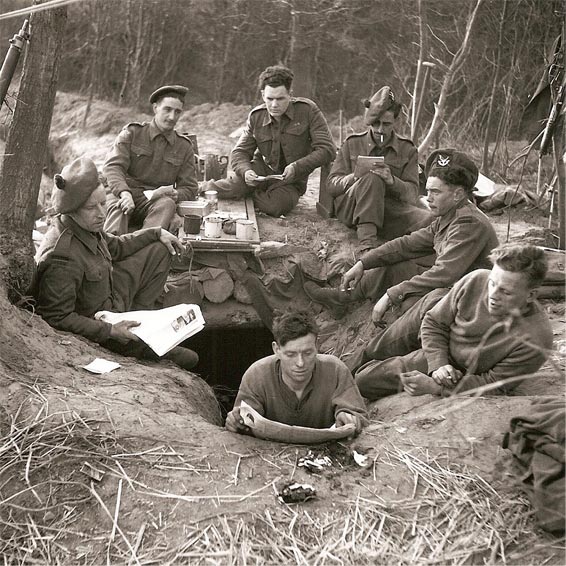 Men of 2nd Seaforth, 51st Highland division, at ease around a dug out on the west bank of the Rhine. 23rd March 1945.

The Role of 152 Brigade as to cross behind 153 Brigade and move through 153 Brigade to capture Mittelburg, Groin and Haldern and advance north on the Haldern - Isselburg road.

The 2nd Seaforth had been detached to 153 Brigade and crossed with them ahead of 152 Brigade. 5th Camerons led the 152 Brigade crossing and moved up to the 5th Black Watch area, where it became clear that they would not be able to press on to attack Mittelburg by first light. Eventually with armoured support they began to assault up the axis of the Rees - Miittelburg road but were held up. They waited for darkness before continuing the assault capturing strongly held brick works and taking Mittelburg which they occupied for the next two days.

5th Seaforths crossed after the 5th Camerons at dawn. By now there was a shortage of boats and the crossing took some time. Eventually they were complete on the east bank but unable to push forward until 5th Camerons had moved on to Middelburg. The 5th Seaforth attack on Groin, which was a village with a number of surrounding farms and buildings, began on the night of 24 March.

The village was taken by 0730 but a farm complex remained in German hands. An assault failed but when a fresh one was mounted the next night the enemy had withdrawn. An excellent account of 5th Seaforths attack on Groin is provided by Alastair Borthwich in "Battalion".

The Brigade was now relieved by the 9th Brigade of 3rd British Division to free up the brigade to take Isselburg. And form a bridgehead over the River Issel. On 28th March the 5th Camerons entered Isselburg without opposition, the Germans having withdrawn, and the 2nd Seaforths found a bridge still intact and were able to cross the River. The 2nd Seaforths came under fire from German strong point beyond the town but this was taken out by Typoons.

The following day 5th Seaforth were ordered to advance and take crossings over the River Astrang. 5th Seaforths seized one crossing, the other having been blown, but had enemy on either side of them. The Germans now evacuated Anholt and retire to Dinxperlo. 5th Seaforth were in their way and either side of the River. On the south side Battalion HQ was overrun and the Commanding Officer, Lieutenant Colonel Sym, made prisoner. C and D companies on the north side, blocked the gunman route and with the arrival of tanks 206 Germans surrender, the Commanding Officer was freed and the crossing secured.