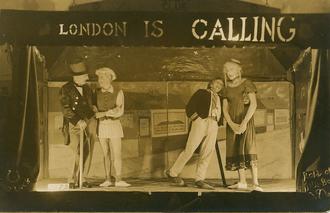 POWs performing a comedy sketch of couples walking out with POWs playing both Male and Female roles on an outdoor stage in Stalag IX-C, Germany.
The date is unknown but the photo is annotated with a marker (No. 2172) and forms part of a series of photos from a night of comedy sketches performed by POWs. The collection belonged to Pte. Harry Knox, Gordon Highlanders, who was a POW at Stalag IX-C from 1940 - 1945.

Thanks to Caron Paterson, Harry's Daughter, for sending this into us.