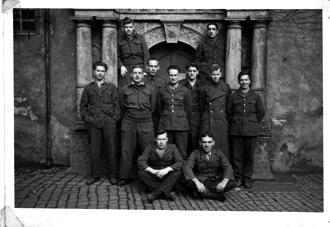 This photograph was one of several sent to us by Beth Marshall, the niece of George Watt Drummond (pictured 3rd left, middle).
It is not clear which of the three camps that George was held within is pictured here. George spent time in Stalag XXIA (Schildberg, Poland), Stalag IVC in Wistritz, Sudetenland, (now Czech Republic) and Stalag VIIIB (Lamsdorf, Poland - renamed Stalag 344 during 1943).