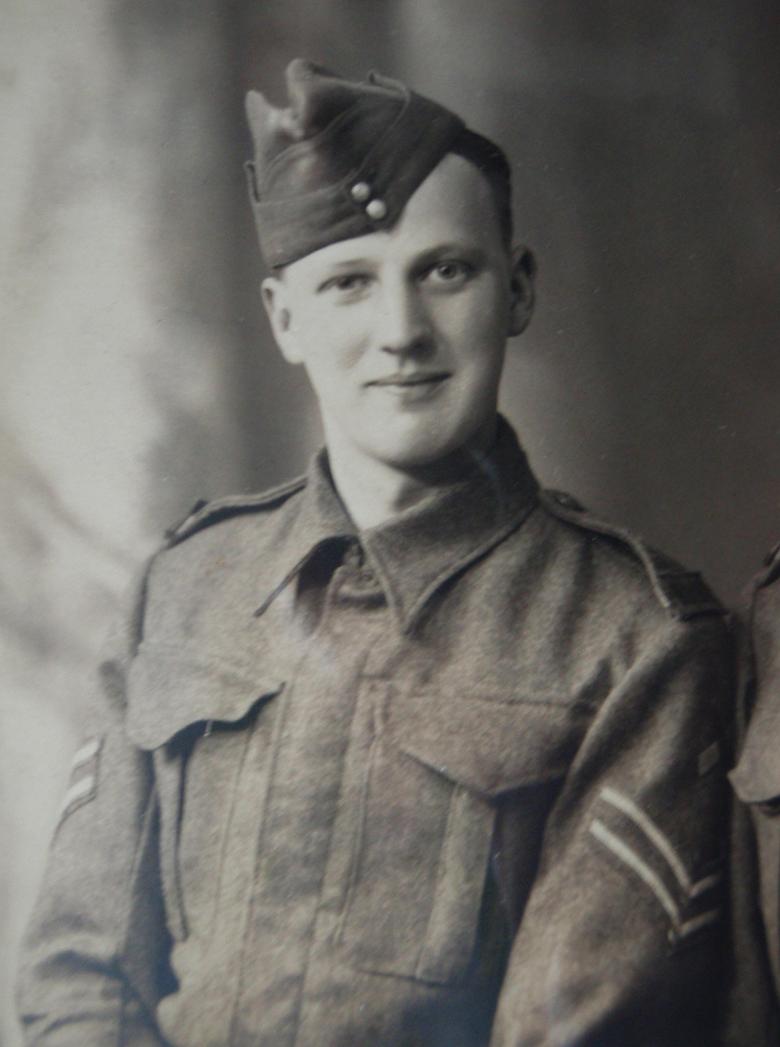 "By the 4th June 1940, our counter-attacks designed to capture the bridgeheads on the Somme having failed, found the Division on the retreat. That night down in the village the streets were jammed with lorries, guns and troops who opined the enemy was threatening the flank and causing the line to fall back. The next day we packed up the office, loaded up and left Grandcourt. We set up headquarters in a large chateau at Bailly-en-Riviere and for some time were more or less undisturbed.

"About midday on the 7th we were packed and waiting in the lorries when a solitary plane flew low overhead. That night there was bombing and gunfire some distance away and daybreak saw a considerable flight of bombers with their escort of wheeling fighters pass over. I was put on 'guard' at a crossroads and watched the refugees stream by when a speeding car knocked over a small dog. Everyone looked significantly at me with my rifle. It was of little good to explain that I had never been told how to fire the wretched thing, so with much trepidation I edged around the animal to get a place where my shot would do no damage to the onlookers or my soldierly reputation. To my great relief the dog looked up, got up and ran down the road.

"The 9th was a repetition of the previous day and by nightfall we were on the lorries groping along without lights. A bang and a cloud of steam told us we had hit something head on --- it was a French staff car which was in no condition to proceed.

Early next morning we stopped at a farm and dumped our kit bags. There were 'planes about and gunfire. About 11 pm. our colonel called us just when we were about to start our nightly trip into the unknown and said that the situation was bad but if we all did our bit there was no reason to worry. The padre held a short service with the men gathering round --- I stood on the periphery and felt neither particularly impressed or worried.

"We had another journey without incident to a farm about four kilometres behind a little village which later proved to be St. Valery.

"It was now June 11th and we stayed in an orchard until about 3 o'clock in the afternoon when the drivers were ordered to damage their lorries --- but without fire as that would make our position conspicuous --- and then evacuate down the road to St. Valery where there was some vague talk about some ships awaiting. I was now a corporal clerk with small military training but was told to take about ten men to St. Valery; presumably where we could then march in good order onto the waiting ships. On an exposed part of this road a flight of aeroplanes came over the rising ground and machine-gunned the road. We dived into the ditch, got out as soon as the scare had passed and proceeded --- to another dose of the same.

"Eventually coming to the outskirts of a small town which we took to be St. Valery, the road forked. There was much confusion with troops running around. I decided to find more of our unit to get some information and after retracing my path a little way fortunately spotted two familiar shapes in the ditch. There was the colonel with the adjutant on top so stirring the latter with my foot I got them upright and once more went back to the fork where they went on, saying they would send somebody back with instructions! We hung around and eventually went into a farm yard where I was grabbed by an officer from one of our companies with the impossible question "Corporal, corporal where are the Germans?". Having got him comfortably seated on a manure heap I decided on the left fork and a few chaps followed. We were soon met with a mob of French soldiery shouting "Boche, un kilometre" but continued on our way and came across some Sherwoods who had placed themselves in a sunken track. We attached ourselves and did nothing in particular and mindful of my original orders decided to carry on with the attempt to get into St. Valery.

"In a large chateau I found what I took to be CRASC as there were officers about using this building, one being our adjutant. I was instructed to wait around with the chaps who had now dwindled to two or three; this we did behind a small army truck. The chateau grounds became very quiet; everyone seemed to have gone inside and there were

disturbing rumours so we decided it was time to sauve-qui-peut and ran through the grounds to the accompaniment of chirruping and the fall of leaves and twigs but the cause was not evident at the time. We tumbled into a sunken road (I actually fell atop of an abandoned motorcycle) and the outlook marginally brightened for we had the harbour in sight. To the east on top of the hill a form was semaphoring and we wrongly put this down to the RN making preparations to evacuate. We crossed some small footbridges over the harbour and quite a few of the men from one of our companies shouted to us to come and join them. Fortunately we did not.

"Now our way led to the seafront; there was a shingle beach and a sea wall and my 'command' had dwindled to two --- Frank Blackie and Kennedy. We joined two more lost sheep --- Fraser Thompson and Singer --- and, as the cliffs to the east rose beyond the town, we got ourselves a respectable distance from the harbour entrance and tucked ourselves on the shingle below the sea wall.

"We lay in file facing the direction of the harbour; there was gunfire which increased with dusk. Soon there was systematic shellfire and mortaring as the Germans apparently commanded all the town and harbour and he could sweep the beach with machine guns. It was a miserable night with incessant drizzle, lots of near misses and nothing to eat except a small tin of Bully Beef from my side pack which was shared. The streams of tracers across the beach deterred us from venturing to the water's edge to search for any hoped for boats.

"To stir from where we were would have been foolish as explosives dropped near enough to shower us with rubble and shingle; it was possible to estimate how near they would burst by the flight noise. There was one particularly loud explosion and big burst of flame when --- presumably --- some ammunition was hit. Into the night the fireworks stopped and dim huddled figures started to pass us. Some said the Germans were coming along the beach so we got up and went in that direction and at the extreme end of the sea front encountered a score or so of purposeless British and French troops so we joined some in moving the wounded into what cover we could find. By this time my companions had dwindled to Frank Blackie; it was around 3 o'clock or thereabouts in the morning. We were wet and miserable and at a loss what to do next. Gradually it seemed to be getting lighter so we decided before capture we would dispose of our rifles by throwing first the bolt and then the gun into the sea. We also spent some time in making guesses as to the identity of the bodies that were washing up and down in the sea. We also thought we saw a dark shape and though it was a boat coming to rescue us but it was swallowed up in the darkness after the Germans sent shells and tracer groping seawards. We felt condemned.

"Another disappointment came soon after for as it became lighter I though I saw the shape of a little boat about a mile away beneath the cliffs. Frank and I, with others, got on the beach and started towards it but were soon met by a bunch of soldiers who told us it was only a wreck. However standing once more on the sea wall the wreck appeared to move towards the open sea.

"As dawn gradually broke we began to dimly ascertain there were ships on the distant eastern skyline. One, two, three ... perhaps as many as eight. What were they doing? Were they ours? I was anxious to go but Frank just wanted to sit. Luckily my view prevailed and we scrambled down to the boulder-strewn cliff foot and started to pick our way along the rocky shore. We passed bodies and at least one wounded chap; there was no protection or hope as the tide was incoming. It was very hard going for four or more miles and I had to keep urging Frank who was an older chap. Some 'planes did fire at something ahead but we gradually approached the ships and then ahead there was a large rowing boat with a British sailor standing in the front and a swarm of French troops around it. 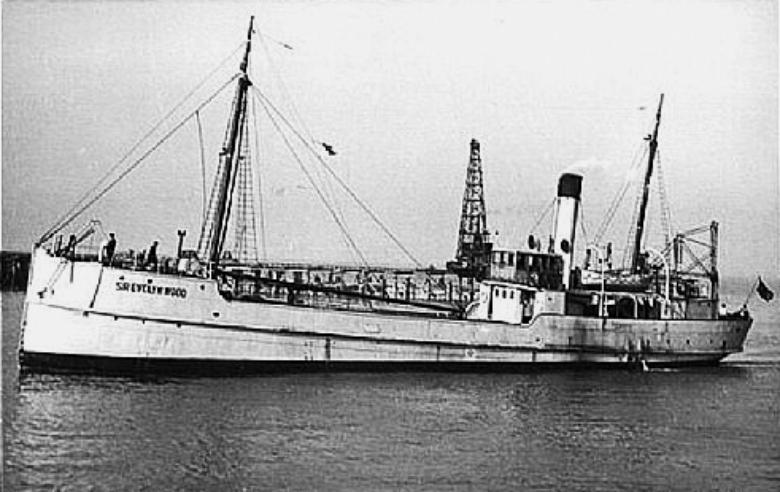 The SS Sir Evelyn Wood, a War Department Steamer, used in evacuate men from France in 1940 and the boat that Tom Garside was able to gain escape from St. Valery on the night of 11th June 1940. The steamer was built in 1896 and remained in War Dept. service until 1958 (cit.)

"We plunged into the water and got in up the side; the sailor fired his revolver up in the air as a deterrent whilst we roused our allied to take up the oars and row to the tramp steamer standing just out. The 'Sir Evelyn Wood' had scrambling nets down her side and our cargo quickly left us and our sailor to make fast. It was now somewhere around 8 or 9 o'clock in the morning of the 12th June and we went down into the empty hold. I slept, though I was momentarily awakened by a bang and was dimly aware that something had smacked into the steel plates near me. I woke up still very wet and found the engine room to dry off my clothes.

"We were over twenty-four hours at sea. The Isle of Wight stood out in the fresh sun. At Southampton there was a brass hat reception, mugs of hot tea and opportunity to change my French notes which kept us all happy for some time. After two days at Southampton we had five days in Bordon Camp doing nothing as nobody seemed to know what to do next.

Then we were sent up to Dunfermline for ten days with a home leave of three days. Hamilton two days and Burnbank four days --- by this time meeting some familiar faces and finally twenty two days in Glasgow.

"The division was consolidated with the 9th Division and took on its old title but perhaps was never the same again."

Written by Tom Wardle Garside of the RASC.

This account was kindly sent to us by Jim Garside, Tom's Son.

In 1940 Tom Garside was with the Royal Army Service Corps attached to the 51st. under Lt Col T. Harris-Hunter TD. Tom had been with the RASC from October 1939 and remained attached to the 51st Highland Division through North Africa and into Sicily. This personal account of escaping from St. Valery is believed to be the only account Tom ever put into writing.

Tom Garside's personal account of his lucky escape along the beach from St. Valery in June 1940.
Kindly sent to us by Tom's Son, Jim Garside.

Sent to us by Jim Garside (Tom's Son)