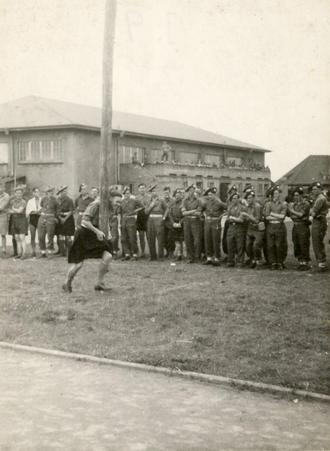 This photo was sent to us by Hugh Robertson's Daughter, Linda McLean, and shows Hugh tossing a caber.
Linda recalls Hugh telling her that this photo was taken due to the fact they were using telegraph poles which are larger than standard length cabers. The location is believed to be Cuxhaven, Germany, during September 1945.
Hugh Robertson features within the account of 5th Seaforth's "Attack on Groin" in his role as O.C. "C" Company. Hugh would become Major Hugh Robertson by the end of the war.
This photo accompanies another of Hugh throwing a shotput at the same location.

Sent to us by Linda Jane McLean, Hugh Robertson's Daughter

Major Hugh Robertson's Daughter, Linda McLean, very kindly sent us a few photographs of her Father after reading about him within Alastair Borthwick's account of the 5th Seaforth's "Attack on Groin" in which Hugh features in his role as O.C. "C" Company.