An extract from "Escape from Saint Valery-en-Caux - Recounting the Adventures of Captain B C Bradford" by kind permission of Andrew Bradford.

The Bn eventually withdrew, embussed after a fairly long march, and moved off in a long column, under the CO at about 03.00hrs. Major Dundas had been sent off with Reece Party, but to a different position than that for which we were making. As no one knew till the last moment where we were making for, the column soon got split up and half was lost.

We took a wrong turning early on as the map was poor, and lead the column to Offranville, near Dieppe. We thought the enemy might be holding this town, but after scouting ahead on motor-cycles, we decided it was safe and proceeded.

At Ouville, we received orders to take up position on the railway at St Pierre-Ie¬Viger, near Fontaine-Ie-Dun, with 5th Gordons on our left and possibly the French on our right. The orders were most vague, and we were told 'to extend as far as we could to the right'.

From Ouville onwards, the road was packed with double lines of transport, and we were often stationary for a long time. It was a perfect air target, and looked more like Derby Day traffic than anything else.

When we could turn off, the CO went ahead with the RIO [Regimental Intelligence Officer- Roger Sandford] and me, leaving orders for the battalion to follow.

After a brief recce companies were got into position on the ground. It was a really bad bit of country - the forward slope of a hill with practically no cover. To make it worse, the line turned at this point and we were holding a salient, with no one at all to the right of us. B Coy was on our right, A centre and D left, with C reserve. Battalion HQ was in a small cottage and orchard. It was difficult to find anywhere for the transport and as most of B Echelon had got lost, there were no rations. However, 2nd-Lt J. Moon found some hard biscuits (from the site of a NAAFI dump), which were distributed and later a cow was killed and eaten.

The French army was streaming over the crest in front and up the main road through our position. They were in complete disorder. The Germans came through on their tails, and got their mortars into a position only 1,000 yards away, without difficulty, as everyone assumed that they were French Chasseurs who were alleged to be out in front.

At about 13.00hrs, orders were received to send recce party forthwith to line from Guetteville-les-Gres to Cailleville, some 12 miles in rear near St Valery. We were told that Bn would probably withdraw there about 17.00hrs, and that we could begin thinning out now. We were also told to be ready to embark that night or the next.

D and C Coys, and all HQ, except one Section of Carriers, were sent back to a wood at Houdetot, leaving A and B Coys and a skeleton Bn HQ in forward position.

During all this time, enemy could be seen occasionally in front, but there was practically no firing. Enemy aircraft flew over several times very low. PSM Royle was killed by Sgt ----, who went quite mad.

About 16.30hrs CO left for Brigade HQ, and soon afterwards tanks were seen in front, and the enemy began to engage us with mortar and machine gun fire. The Signal Officer was sent off to the rear HQ to order up the Anti-Tank Platoon.

B Coy was not dug in at all, as their tools were missing with their transport, and, in any case, it was thought that the position was only going to be held until 17.00hrs. Bn HQ and A Coy were dug in slightly. (Our best trench was used for burying PSM Royle in and later we regretted it very much.)

Some French Cavalry had arrived about 15.00hrs and taken up a position round Bn HQ mixed up with our men.

By about 18.00hrs, we were being heavily engaged and shelled and B Coy withdrew without orders to the line of the sunken road only 150 yards fromBn HQ. Their position had been exposed completely to continuous M.G. fire from a flank, and they had had fairly heavy casualties, but by withdrawing, they let the enemy advance very close to our position.

The Signals Officer had not returned with the Anti-Tank Platoon, and at about 19.00hrs 2nd-Lt Moon was sent on motorcycle to try and get into touch with the CO at Bde HQ or to get some sort of orders, as the situation was getting difficult. Maj. Dundas had left with Reece Party at 13.00hrs and only the Adjutant [Bradford] was left at Bn HQ.

Freddy Burnaby-Atkins wrote: "I ought to say that during the battle leading to the surrender at St Valery, Bill Bradford, for long periods, was virtually commanding the battalion and communicating mostly on a commandeered bicycle!" 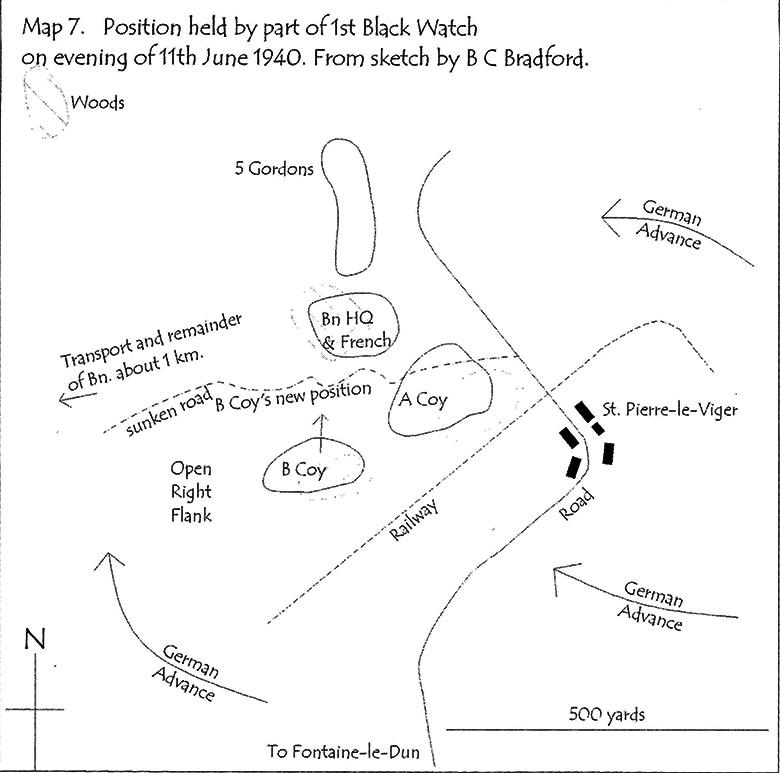 A sketch map taken from an extract from “Escape from Saint Valery-en- Caux - Recounting the Adventures of Capatin B C Bradford", showing the position of 1st Black Watch on the 11th June 1940.

The position we were holding was roughly as shown [see map]. B Coy had the left forward position. At about this time firing began on our left flank and rear, which was also completely exposed. The enemy were also getting round our right flank.

Soon after 20.00hrs, I saw the French Commander, and told him that we were suffering heavy casualties and might not be able to hang on much longer. He said we must hang on until dark, and that his orders were to stay until dark and then to withdraw before us. The shelling, mortar fire and machine-gun fire was almost continuous, but the shelling, though accurate, was not really heavy. The French troops were excellent, and continued to fire and keep their heads up in spite of the shelling. Their commander was badly hit and had to be helped round his positions.

At about 20.15hrs the enemy got into position on our right flank, and one Section of Carriers were put into dismounted position out on right flank to stop them working round further. At 21.00hrs we decided to withdraw at 21.45hrs in conjunction with the French - rendezvous at a road junction in the rear and then make for Guetteville - Cailleville line. The enemy were very close up by this time and movement round Bn HQ was difficult. Several runners had tried to get into touch with remainder of Bn since 19.00hrs, but we had had no news back. I wanted them to extend their line to join up on track with B Coy.

As many wounded as possible were piled into the office truck, which L/Cpl Farquharson drove across the fields to the road to try and get to hospital. (I saw him later, just after we had been made prisoners, with arms badly wounded and having lost a lot of blood. He told me he got to the hospital all right and had then tried to get back to B Echelon, which he did. In the morning B Echelon were ambushed when on the move trying to rejoin me at Cailleville. The Boche tried to make him walk but after arguing with an officer I at last managed to get him put with the RAMC. I learnt later that he died.)

Just before 21.45hrs, one platoon of A Coy, with its commander, withdrew and caused confusion in the remainder of A Coy. Everyone got the idea that the enemy were right on top of us, and it was difficult to keep men at Bn HQ in their positions.

The Carrier Section was withdrawn from the right and got into position round a cottage at Bn HQ. They were ordered to act as rear-guard, and to remain behind 5 minutes after the remainder had left. B Coy, I learned later, did not withdraw for some time, as the Coy Commander was trying to make arrangements for the wounded. As we had no stretchers and only one 8cwt truck without driver, this was impossible. Wounded were put on Carriers, but I'm afraid many were left. It was awful.

I withdrew with Bn HQ slightly after rear of A Coy. On getting some way, I found that my servant, Gardiner, whom I had posted as a flank, had not come, and had to go back and fetch him. I had told him not to move unless I told him to. On reaching the road in 5th Gordons' position, I found a number of men from A Coy who had got lost from their Coy Commander. I tried to find Capt. Walker, but couldn't. I also collected a number of men from B Coy, and the Carriers joined us there.

The Gordons told us to avoid the road (their front line), as the enemy were close on the other side, so, with a party of some 100-120 men, we pushed on in the ditches on either side. There was a good deal of firing. We turned left at a crossroads some miles on, and then had a bit of a skirmish with some French troops, who were 'withdrawing' in the opposite direction.

We reached Guetteville at about 01.30hrs I found some anti-tank gunners, but no one knew anything of our brigade. The Anti-tank gunners were about to march off and told us that no one else was in the village. The men were incapable of moving further, so I decided to halt for 2 hours. I was literally asleep, and had to make Sgt Matthewson walk beside me and keep me awake and on my feet. We lay down on the stone floor of a schoolhouse, with a guard on the crossroads, in case any of the Bn appeared.

Burnabv-Atkins commented on the struggle to keep awake."The difficulty from the point of view of a junior leader was that, when we had a ten-minute halt during these night-marching withdrawals, one had to keep awake oneself in order to be sufficiently alert to wake one's soldiers at the end of the break. It was agony."

St Valéry-en-Caux is a small port lying in the only break in the chalk cliffs that line this section if the coast. The cliffs are around 300ft high. The men if the 51st were still expecting evacuation by sea from St.Valéry but fog in the Channel on the night if 11/12 June prevented this. By the following morning German troops had reached the cliffs to the south and the beach was under fire from their guns.

At 03.45hrs, we continued the march. It had been, and still was, raining. For some reason, two of the Carriers had turned off and tried to find the Hospital, leaving only one with us. We lost the way a little and halted at about 05.00hrs near the road to St Valery, where the column of deserted transport began. I collected a bicycle, and went to Cailleville to find the battalion but it was deserted except for a few French cavalry and was obviously not being held by us.

(A note by the website historian. “Escape from Saint Valery-en-Caux - Recounting the Adventures of Captain B C Bradford” is highly recommended, recording both the deployment if the 51st Highland Division and the retreat to St.Valery as well as the extraordinary account of Captain Bradford’s subsequent escape.)

by kind permission of Andrew Bradford