A previous extract from Driver MacAskill's account covered his evacuation from France with Arc Force. MacAskill was with the new 51st Highland Division when it deployed to Africa. He provides a fascinating account of the logistic support at El Alamein.

The Division then moved into the Nile Delta area to defend the approaches to Cairo from west and southwest, although we could not yet be regarded as desert-trained, but there was no one else.

General Montgomery had taken command of the 8th Army from the 13th of August, and on his orders all troops and vehicles were to re-instate the wearing of divisional and regimental badges, thus repealing an earlier GHQ order condemning all units to faceless anonymity. The HD were delighted and none more so than our General, "Tartan Tam" Wimberley. Large HD signs were planted all over the desert, and soon earned the Division the nickname of the "Highway Decorators". (Spike Milligan, who served as a gunner with some other division called us the "HyDraulics" because, he said "They'd lift anything) So we were no longer just a British division, we were again the Highlanders and we were here because in the event of the expected German attack on the night of 30/31st August succeeding, we were blocking the approach to Cairo. The German General Rommel told his troops that their next attack would finally drive the British out of Africa. He attacked as expected, but the Indian, Australian and New Zealand troops facing him held on doggedly, and the attack finally petered out. A Cpl. and I, with another driver accompanied a radio truck to the fringe of the Quattara depression. I'm still not too sure why this was required, but I believe it may have been to report any possible enemy movement round the edge of this long area of soft and shifting sand, an almost impassable, but not impossible barrier. Only the Long Range Desert Group penetrated this desolate area in which all the flies in Egypt had gathered in this one spot. In the comparative chill of early morning the canvas canopy of my truck was a heaving, buzzing mass, which came swarming to life as the sun warmed up. Of all the plagues of Egypt, flies were the worst.

Firewood was a very scarce commodity and we became accustomed to seeing nomadic Arab families with a small bundle of scrub on their camels, though the bulk of their fuel was the dried dung of their many animals, sheep and goats as well as camels. We, who had petrol to hand, made our fire in a can containing some sand on which a little petrol had been poured. This could boil a brew-can quite quickly. We already knew that the cordite which was packed in different coloured canvas bags and formed the charges in the field gun cartridges, was an excellent and very fast-burning fuel when removed from the little bags. These were found all over the place after the guns had been in action . When the correct charge for a particular 'task' was arrived at, the gunners dumped the unwanted bags of cordite from the cartridge. All this was part of becoming 'desert-wise', as was for us, the driving through the night without lights, over routes marked only by the tracks of other vehicles.

It was possibly the difficulties this could cause which prompted the 'marked track' idea. Most units had their company or regimental HQ marked at night by a small oil lamp concealed under an old petrol can which had the unit's I.D. number cut out on the side away from the enemy. These, at ground level, were often the only indication a driver might have to show whether he was, literally, on the right track. Anxious enquiries were quite often made by people descending from their vehicles, and going on foot to find someone who could answer a question like "Where the hell are the 'n'th Black Watch?"

A certain amount of tension could arise on a really dark night, when a stumbling approach to a slit trench might just bring a shot instead of the correct challenge.

The planning for the 2nd battle of Alamein included the clear marking of three separate tracks into the forward areas. These were designated "Sun","Moon","Star". We cut empty 4-gallon'flimsy' petrol cans using the prepared stencils, cutting the 'Star' sign on two opposite sides. Similar cans were prepared with our 'Ammunition Point' identity for placing outside our Company HQ. Divisional sign-writers (there was indeed such a section- part of the Military Police), came up with a six-foot square sign beautifully done in full colour, showing a very large HD, followed by our Brigade code number, and to ensure that our regular visitors in the German aircraft knew exactly what they were shooting at, they had reserved their largest writing for the words - 'AMMUNITION POINT'!.

The German pilots showed their appreciation by regularly using the sign for shooting practice.

It was all part of Gen.Wimberley's belief that "We must let the Hun know who he's up against", a classic piece of WW1 phraseology.

Somewhere my mate had acquired what had probably been part of a ship's hatch cover, washed ashore from some unfortunate vessel. Good solid wood, with a covering of 1/4 inch steel plate 6ft long by 4ft wide and we carried it with us wherever we went, one of the perks of having our own personal transport. It was just the right size to provide a fairly bulletproof cover to our slit- trenches. I say slit-trenches, plural, as everywhere we went if we were to be there even for only one night, we had to dig or occasionally find a trench which served as sleeping accommodation and/or a defensive position. I think we finally left this useful thing in Algiers, before going to Sicily. 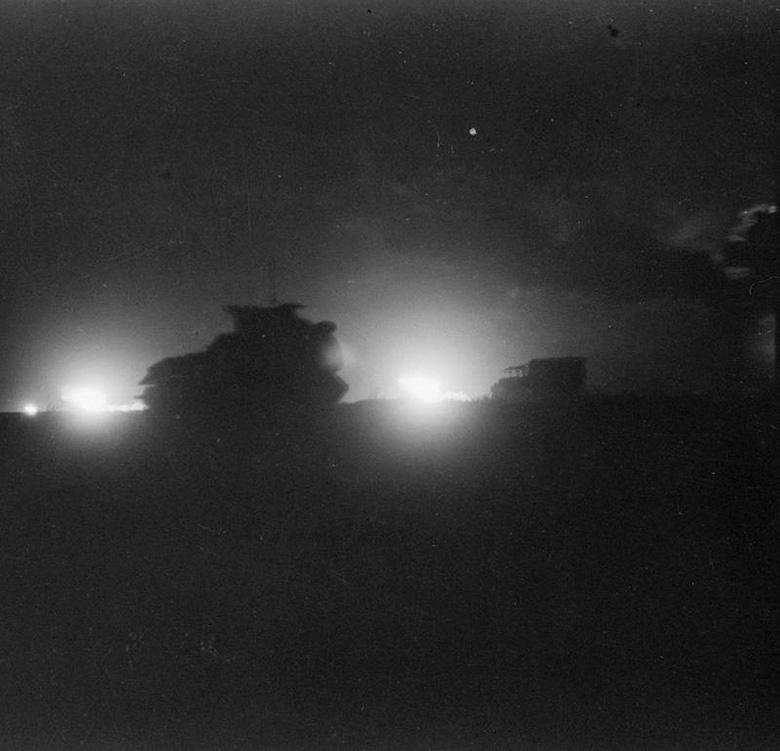 Vehicles silhouetted against the flash of artillery

However during the buildup to the Alamein battle on 23rd October our nights were mostly spent driving up and down Star track taking 25pdr.ammo. to the guns. In the three days immediately preceding the opening battle I had less than eight hours sleep altogether, and that was snatched in half-hours or so at the wheel while waiting in the queue at the base depot.

On the second night I found I was driving along a road lined with leafy trees , beech and oak, with here and there a birch, although I knew very well that there was nothing on either side of the track but sand for miles. This sort of illusion is apparently quite usual when over-tired.

At about 21.30 on the night of the opening barrage my mate and I delivered our last load and were told to "push off out of it". Nobody in the forward areas liked having our noisy 3-tonners growling their way through their positions. We needed very little persuasion to "push off" in search of a comparatively sheltered spot where we could at last get out to lie down to sleep. We stretched out under the truck, and though I heard the single shot which was the signal for the starting of the barrage I was asleep within seconds. This was one of many occasions I was thankful not to be PBI [Poor Bloody Infantry], many of whom were now facing their last few minutes of life.

We were wakened in the early hours, with all the noises of battle going on, and found that a squadron of tanks had pulled in overnight to share our laager. It may sound unbelievable that anyone could sleep for three or four hours with all that row going on, but most people could if they had not slept lying down, for something like seventy hours. However, having now reluctantly returned to the real world, the continuing noises made us realize that we were in a hazardous location, and the sooner we were out of it the better, so with no more ado we drove off back to our Company and loaded up for another day. 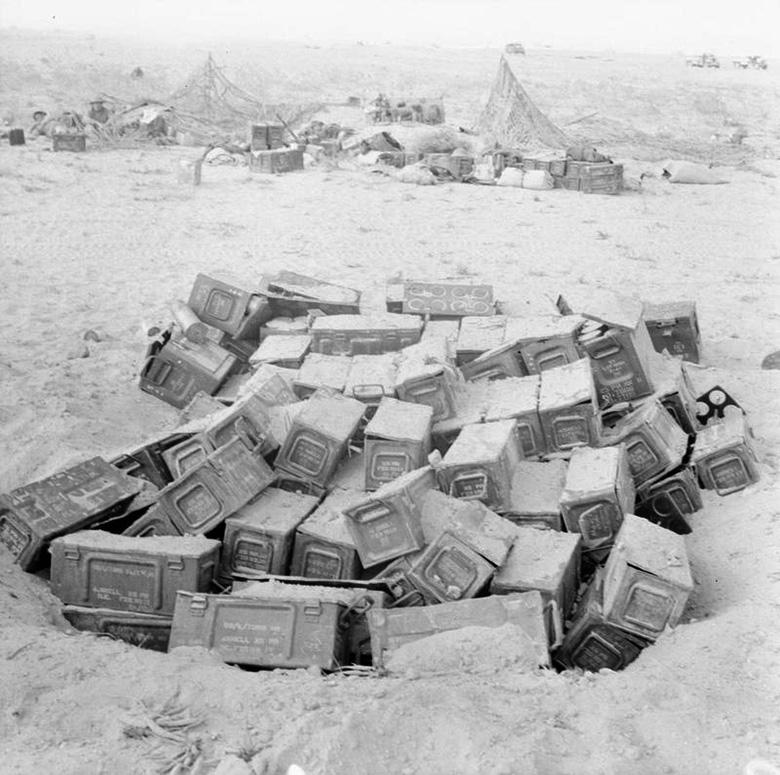 A large heap of empty 25lb shell boxes, photographed at dawn 24 Oct [1942], illustrates the intensity of the opening barrage at the Battle of El Alamein.

I've read that our Artillery were firing at the rate of 15,000 rounds every 4.5 hours during the several days of the Alamein battle. We had quickly learned that the careful handling and neat stacking of the boxes of shell and cartridge taught us in our training days were not needed here. The gunners wanted the ammo. quickly, so the boxes of shells were thrown from the back of the truck onto one heap the cartridges onto another. A 3-ton load disposed of in no time, and we went back for more. This was the routine for the whole five or six days of the battle, although the pace did ease off a bit after the opening barrage. At one point during the next three or four days, one of our number was delivering to one of the infantry battalions but overshot them in the dark, and unluckily got caught up in our own barrage. He could only lie still and wait till it eased off, which according to him, was hours later. He was so pale and shaken it seemed heartless to tell him it had been only a 30 minute 'task', and it was his own fault for getting lost. On 3/4 November HD, plus a brigade of 4th Indian Div. launched what was to be the last attack of the Alamein battles. This attack, led by 7th Argylls of 154 Bde., was supported by seven regiments of artillery firing throughout from 5.30 a.m. A very hectic time for us, with the guns again using ammo. as fast as we could supply it. Fortunately we were able to make most of our journeys in darkness, as for most of the way we were in full view of the enemy. Quite exciting for those who like that sort of thing.

The Argylls objective was a former German divisional Headquarters, and yielded much valuable equipment; store of fine wines and a large number of Iron Crosses and Afrika Korps badges, which is why so many Jocks, judging by their badges and decorations that day, were highly decorated members of the German Army!